From 1st to 30th of November 2007, “DOTMOV FESTIVAL” was held in 4 cities in Japan. In Tokyo, a book cafe space in Nakameguro Combine had presented screening during the festival month. Also as a collaborated event, there was “Media Opera <h />our<br />link” directed by Hideaki Takahashi aka Mjuc at Asahi Art Square Hall, as well as a DOTMOV special event at Combine cafe. 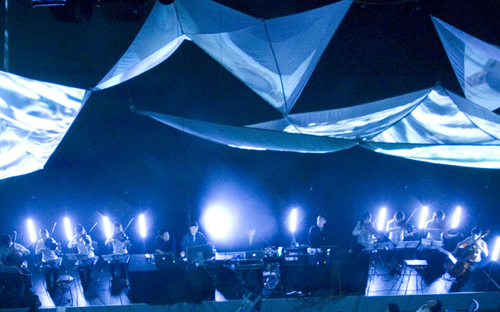 The “Media Opera <h />our<br />link” on 17th and 18th of November at Asahi Art Square, was a marvelous space suddenly appeared in an old town in Tokyo. Different from a general opera style, the venue had no main stage, but only a booth for sound and visual players, 6 multi-projection screens suspended at various angles from the ceiling, LED light displays, speakers, and that’s it.

For about an hour and a half, the performance with sounds and visuals brought the audience to its marvelous world. The introduction part made us feel our deep consciousness with pitch-darkness, fragment of abstract sounds and blinking LED. The second half showed those fragment sounds turning into clearer musical composition with visuals on the multi-projection screens. I interviewed a director of this event, Hideaki Takahashi, who hotly challenged the new form Media Opera.

The theme was something like “imagination to others” and “awakening of reality”. There are things happening in the actual world but we are not too aware of. The concept was to condense those things into short hours. 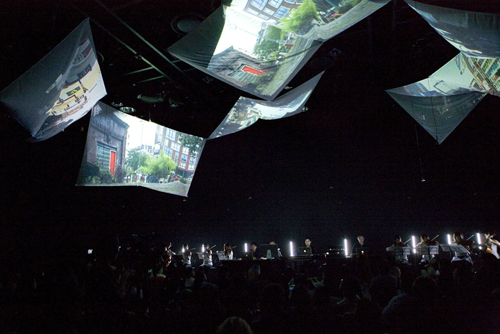 How did you choose the form of “Media Opera”?

I’ve been doing many live performances using visuals, which were mainly with abstract expression, but I noticed on this event that I had something to express more with themes, and had a feeling that we need some comprehensive way of expression. That was the beginning, so it’s not that I “chosen” the form of Media Opera. I didn’t even know how I could call something like that. To tell the truth, I felt a bit uncomfortable to call it “Opera” because it strongly reminds the traditional Opera, but it could be ok as something like composite art with a theme.

Speaking of Opera, a story usually consists of elements such as lines and songs. What was the reason you made effort to avoid those elements?

The primary reason we didn’t use lines at all was that I wanted to let the audience free without holding their imagination by words. Again, “Media Opera <h />our<br />link” had a theme of course, but it’s not that we put a story in it, but I was thinking a role as a trigger to get certain things out of the audience.

I had a impression that the whole work was very abstractive, and that each individual could receive various meanings from it. What was the idea to this direction?

That was the most important part of this work, I think. Hopefully, individual memories or thoughts people are not really conscious of in daily lives would come out while watching this work. 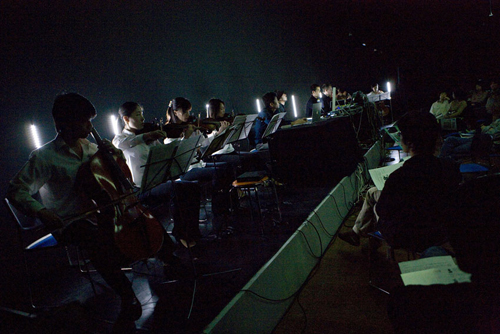 As another impression, the video was especially fragmentary, and children from various ethnic groups and international news video on the screens were symbolic. What did you mean by that?

I meant something to be able to see by juxtaposing fragmental things. I think there are still shared parts or things we can relate to in this society or current world which have different situation, thoughts and lives. Especially these are a lot in childhood, and that’s why we showed various children playing in all innocence.

On the other hand, the international news video has big problems with the way to carry, and in the receivers, in my opinion. So we tried to provide the situation of looking down upon those news. Actually, the scene uses enormous amount of news source in visuals, but the sounds were selected and used only some parts. The real society has also those filters including intentional one by media and unconscious one by individuals, and the idea was to create such situation in the intentional form.