The city of Berlin attracts artists from all over the world, not least because of its affordable and relaxed lifestyle, but because of the innumerable amount of commercial and artist run spaces. Cultural life really thrives here, and it’s hard to keep count of the many galleries and cultural spaces that have emerged in the past few years, not to mention the increased presence of Berlin’s galleries at the major art fairs. 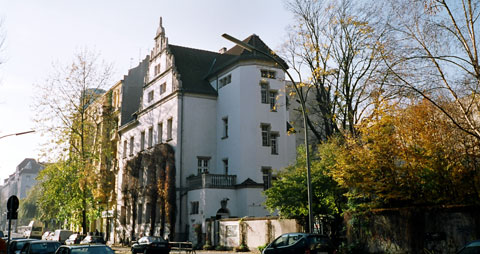 Nestled between a park and a canal in the heart of Berlin Kreuzberg is GlogauAIR – a recently established contemporary arts centre. The former school building was purchased by renowned Spanish artist Chema Alvargonzález, who has thankfully seen to the building’s complete renovation, promising to provide not only artist studios but a cultural space for public presentations in the form of exhibitions, performance, screenings, concerts and artist talks.

GlogauAIR offers a number of three and six month residencies each year, to artists in all fields of art practice, and it’s this wide approach which sets it apart from other residencies. Artists working in the fields of anything from more traditional practices such as painting and architecture, through to more contemporary practices in the field of electronic music, net art installation and video art, are all encouraged to apply for the residency program. 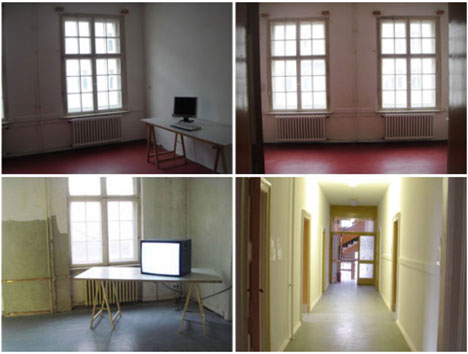 Katerina Valdivia Bruch, GlogauAIR’s Artistic Director, has been running the space since the end of April 2007 and is keen to develop it further beyond the scope of an artist residency program, into more of a cultural centre, to promote the exchange of international artists and provide an international network in the field of contemporary arts. At the moment, her focus of attention is to create an international platform for creative exchanges and collaborations between Asian, European and Latin-American artists. She is also in charge of ‘Arts in Conversation’, a regular feature of the GlogauAIR programme, in which visiting artists are give the opportunity to discuss their work to other artists and members of the public. It’s an open information session, a chance to open up the dialogue for a more in-depth discussion about the artist’s practice.

I went to meet Katerina at GlogauAIR, to find out more about the centre, and asked for her thoughts on what makes Berlin such an attractive place for artists to visit and base themselves in.

‘Berlin has always been a place for the arts. In the Twentieth Century, avant-garde artists came to Berlin to develop their creativity and to present their work to an international audience. Later, during the wall period, West Berlin was attractive for its special status as a cultural capital and international scene, which was closed to Former East Germany and other East countries, but was opened to the world.

Also, young artists can afford living here with less money than in other European capitals, such as London or Paris, for example. Berlin is a tolerant city and has a curious audience, opened for all type of arts and for experimentation in all levels.’ 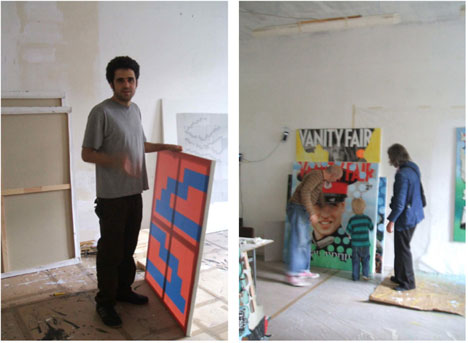 The recent crop of artists taking part in the residencies have come from all parts of the globe, including Colombia, Spain, Israel, the U.S. and the U.K.

Sarah Newman, a photographer from Miami, Florida, has spent three months living and working at the GlogauAIR space. She has used her time there to develop a new photographic series, documenting children’s playgrounds in Berlin at night, using a process involving directed lighting and long exposures. She explained to me her interest in Berlin, as a city that has much potential to inspire and inform her work. 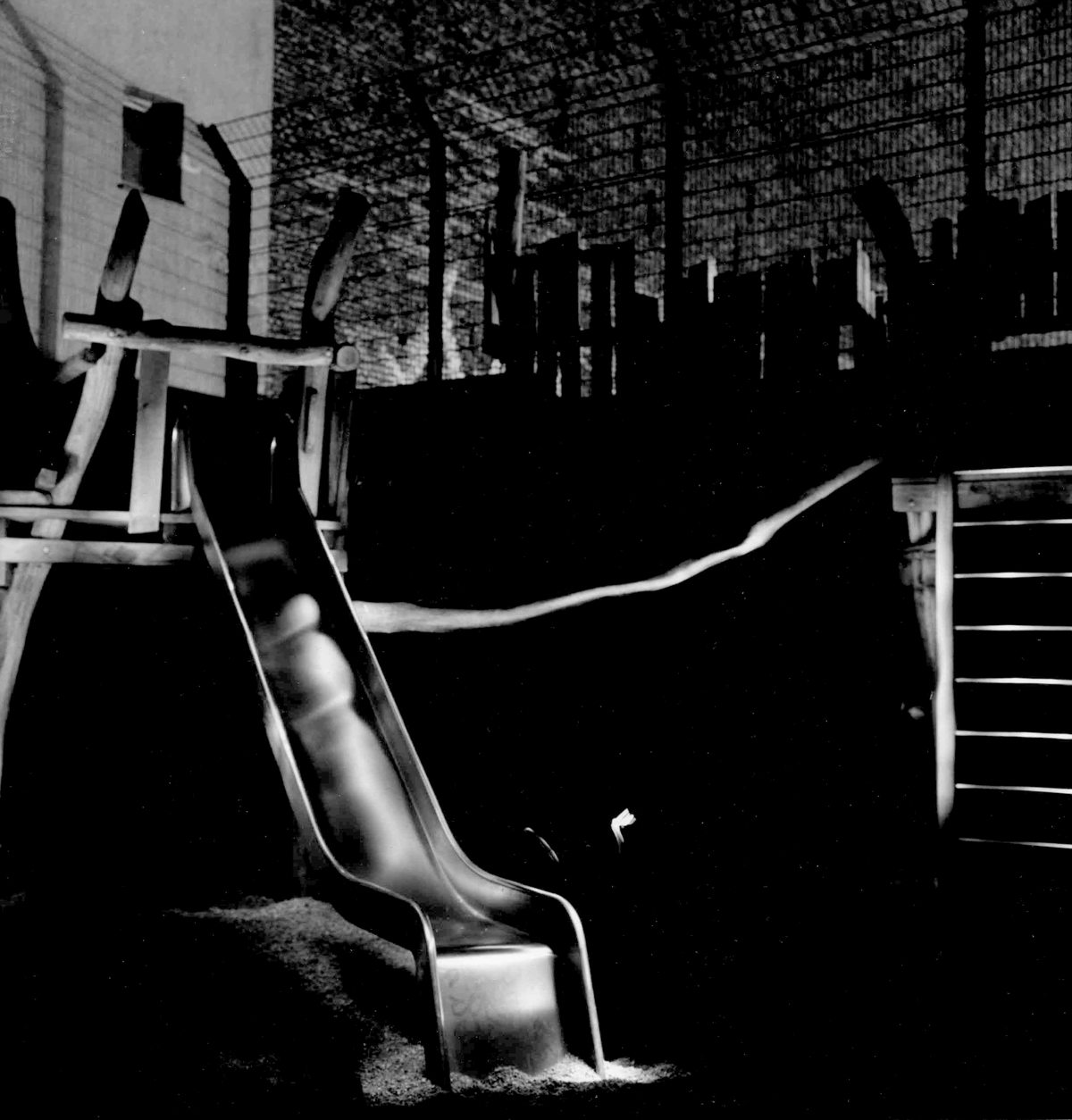 ‘I’m fascinated by the urban landscape of Berlin. During my time here I’ve walked a lot throughout the city, and in Kreuzberg especially, where there’s so many parks and open spaces, and I was amazed to note how many children’s playgrounds exist. So I decided to create a body of work around these playground spaces, and document them in a specific, controlled way.’ 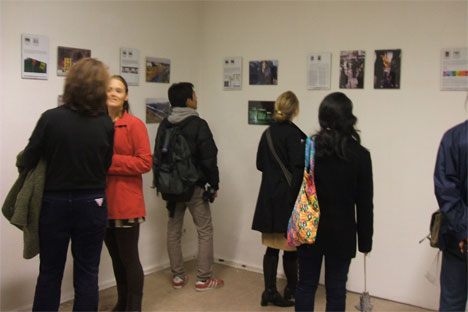 Indeed, for many artists, coming to Berlin is not just about discovering urban spaces, it’s also about meeting other artists, and it seems Berlin has become somewhat of an international meeting point. The general feeling seems to be, that Berlin’s art scene is a little more open and welcoming than many other major cities.

David Maroto, another artist finishing up his residency period at the centre, agrees. He’s a Spanish video artist based in Rotterdam, over in Berlin for the three-month residency program.

‘I found the art scene in Spain pretty restrictive, and I didn’t feel the sort of work I was creating had much interest there, because it’s video art and animation and not entirely accessible. I base myself between Rotterdam and in Berlin, which for me is combining the best of two cities, with each serving a different purpose.’ 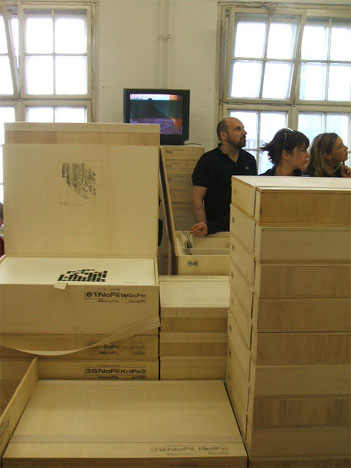 Berlin offers creative minds the chance to practice their art in an unrestricted way, and GlogauAIR’s aim is to add to this by establishing international links so that artists can enjoy mobility and collaborate on projects with artists of different nationalities. GlogauAIR includes international collaborations, and one such project is ‘TRANS+’ with Berlin based Japanese video artist and performer Erika Matsunami and Greek composer and musician Antonis Anissegos, who are inviting Japanese visual artist Kyota Takahashi for a project which will take place in May 2008 in Berlin. The last month of their creation process will be spent at GlogauAIR, with Mr. Takahashi as a guest artist living and working in the house.

So what’s next for GlogauAir? Exciting news is that a new gallery space is being planned, located right next to the residency space, to give artists connected with the centre a more established location to show their work. And Artistic Director Katerina Valdivia Bruch is busy establishing more useful international links for the centre, which could lead to exchange programs between a number of European cities. 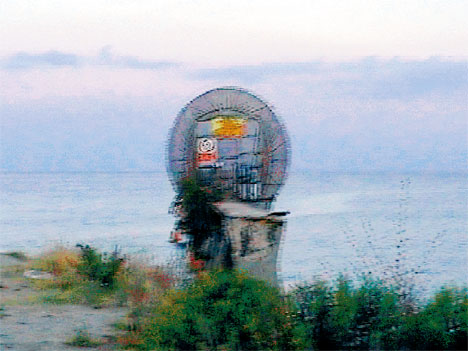 GlogauAIR is on a path to establishing itself as an important centre for cultural exchange and expression, and as a relatively new space, it’s already proved its worth in Berlin’s artistic scene. It’s refreshing to see a residency program and art space so open to such a diverse range of art forms, allowing cultural practitoners to get on with the job of making their art, and giving local Berliners a constantly evolving program of art to digest.