It’s that time of the year again! T-shirt Design Olympics, brought to you by Uniqlo!

Uniqlo’s annual T-shirt design competition, known as “Creative Award” since 2004, is now re-named as “UT Grand Prix” from this year. Applications will be accepted from August 15.

Uniqlo’s “UT STORE HARAJUKU.” is a T-shirt specialty store, opened on Meiji St. in April 2007. “UT” is an iconic term for “Uniqlo T-shirt”, and therefore the “UT Grand Prix”. 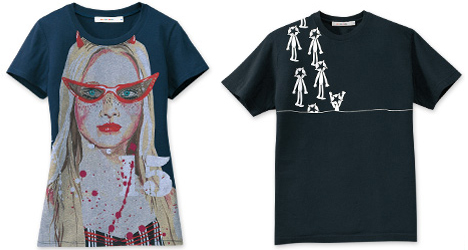 Based on the concept of “T-shirt Design Olympics”, applications of T-shirt designs will be accepted from young & upcoming creators from all over the world.
A thousand works will be chosen in the first phase of judgment, & these will be shown on the web.
Web users would then vote their favorite designs, & a UT judge panel would then make their second judgment.
Finally, 30 designs will be selected by presiding guest judge, & these designs will then be sold as UT (Uniqlo T-shirt) at Uniqlo stores.
Cash & other prizes will be presented to the winner(s). The Grand Prix (top) prize is 3 million JPY (or equivalent in local currency at current rates).

The guest judges are: Kashiwa Sato (art director), Tadao Ando (architect), Yayoi Kusama (avant-garde artist/novelist), among seven others.
This is a great opportunity for you to have a world-class creator see your work!
Check the website for more information.