On April 21st I had a chance to join the East London Art Walks hosted by COMMENT ART. COMMENT ART is a group that dispatches information about art in London. They produce the East London art map, which coverts gallery info in London (a PDF file available for downloads). It is a must have book for people who have an interest in art and design. Art Walks is an event that takes place in show ditch and personal green (where small galleries are gathered). This event is presented and produced by Lean Barber (an ambassador of COMMENT ART). This two-hour tour (guide included) takes visitors on a walking tour of 6 to 10 different galleries. Lean stated, “I want more people to feel the change of the art scene in London that happens everyday in the small galleries. That’s the reason why I started the tours.” 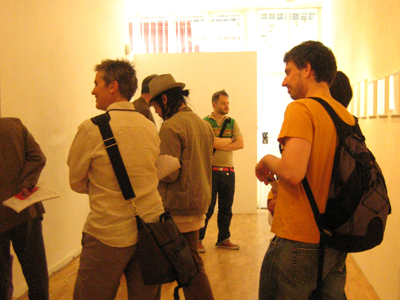 Today’s guide is Lucida, a painter, who has a studio in East London. Various people joined the tour, such as a rich Indian married couple who were into collecting art, a young couple from Southern Europe, a Belgian businessman spending what spare time he had on his business trip on the tour, and us. The whole group consisted of about 10 people. A lot of galleries here are small and sometimes closed unless you ring the doorbell, which makes it very easy to miss out on some good artwork. The tour turned out to be a great deal in that we visited many different galleries and didn’t get lost. Furthermore, the guides tend to be artists themselves or actually work in some of the galleries and were able to explain exhibition in a short concise way. The guide would explain the exhibit in about 2-3 minutes and let the tourists spend the rest of the time on their own. Each person on the tour was into different things and different styles of spending time; some were into what the guide had to say, others were checking things out at their own pace, and others didn’t have much time for either and left. 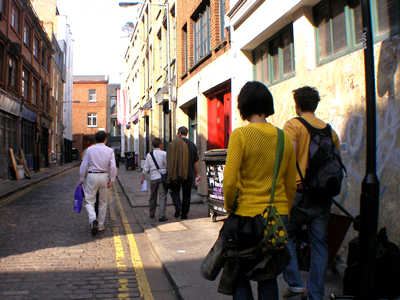 Some interesting spots to introduce.

The White Cube is considered the pioneer gallery for the art scene in East London. They just had an opening for Jessica Rankin’s first solo exhibit one day before we arrived so it was pretty busy. Jessica is an artist who expresses her art through abstract imagery like a combination of the universe and nature with some fine embroidery. There were some basic sketches for the projects upstairs. Her pieces showed the viewpoint she had from traveling all over the world as she traced it in her own way. The response from the crowd was great. Throughout the whole of this inspirational area in London, I believe the White Cube was extremely stunning for its powerful significance of existence and with their choice of artists.