A largest wall in the hall is set for “shooting spot” where visitors take photos with a maid. Polaroid pictures posted on the wall becomes an art work. And furthermore maids draw a picture with ketchup on an omelet, serve pudding to visitors, decorate a cake etc. A plenty of Maid Kissa services during the party. 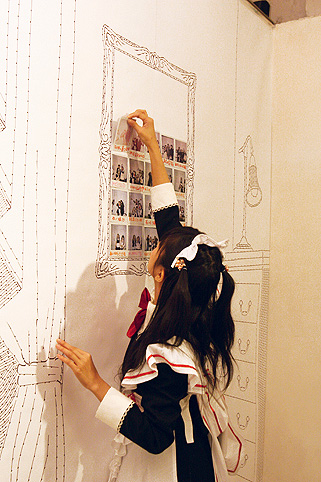 Both members of Harmonica Bldg., become a butler and a maid, enter into the spirit of the festivities. Around two groups were there that night. One is the patrons of Maid Kissa, and the other is in graphic design. They would never have met one another unless this event was held… Harmonica Bldg. as a bridge. A maid’s presence. It is a party with a mysterious atmosphere that nobody knows. 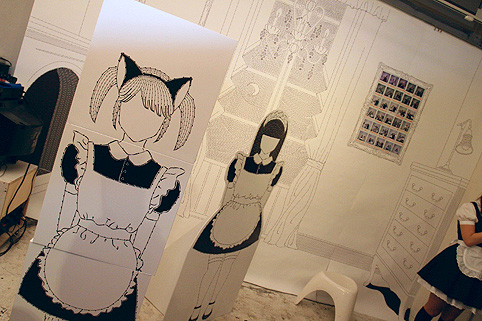 This Harmonica Bldg.’s work reminds me “Alice in Wonderland”. A main character of this picture book also wears something like apron-dress. Classical “Alice in Wonderland” and “Maid Kissa” of Japanese modern culture. A graphic design binds these two in this exhibit as well as the opening party. “Wonderland” from Sapporo presented by SOSO CAFE… having a joyful moment thinking in this way, I cannot help grinning with feeling like having been had by Harmonica Bldg..