After an extended skate session at sun down the crowd moved on to the screening of the movie. “Rising Son”, which is narrated by Dennis Hopper and directed by Cesario “Block” Montano, follows Christian Hosoi’s life from his rise to the first true skateboard superstar, to his fall and imprisonment, ending with his miraculous recovery.

Never-before-seen home movies and footage of the early years illustrate the richness of the 80’s skateboard culture and let the viewer immerse completely into the skate scene of the time. Interviews of his family and friends, including such skate legends as Tony Hawk, Tony Alva and Jay Adams enhance the feeling of authenticity.

After depicting the enthused and unparalleled rise to skateboard stardom, “Rising Son” does not compromise to show the harshness of his tragic fall and dark years of drug addiction with the climax of his arrest at Honolulu airport for drug trafficking. 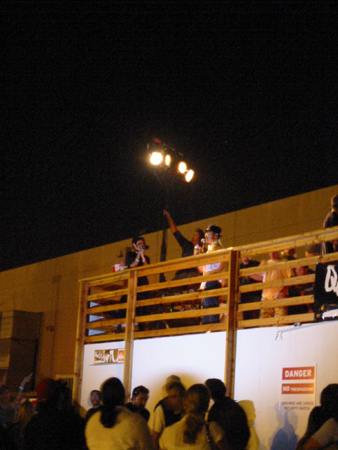 During his imprisonment Christian, who invented the specatular “Christ Air” forming the shape of a cross with his body in mid air (shown on the DVD cover), found the religion of Christ which gave him the inner strength for his recovery and way back into his new life. He resumed his skateboarding career and is on the Quiksilver team.

From the “Christ Air” to now being an associate pastor at a church of Christ in Huntington Beach – Was it his destiny all along?

He found his way and many will be inspired to find theirs through him! A different kind of stardom.

For more info on the event and upcoming screenings of “Rising Son”, please
visit the following link.