Anyone walking the streets of Los Angeles with an open eye for street art might have had a strange deja vu experience at the Kidrobot store in Santa Monica on April 20th. The funny looking bubble like creatures you would find staring at you from some sprayed wall or billboard in the city, have invaded and taken over the display and interior of the Kidrobot store on the picturesque 3rd Street Promenade. 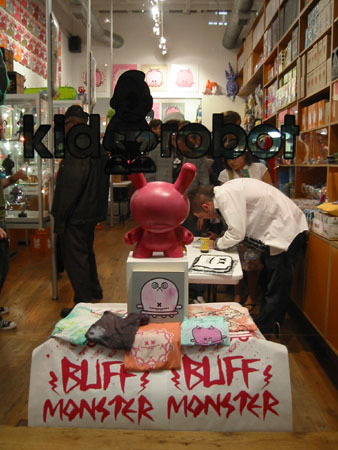 The creator of these colorful little fellows is graphic artist Buffmonster, who could easily be detected by the pink shoes with the fluffy white laces, staying true to the prominent color of his pop art. 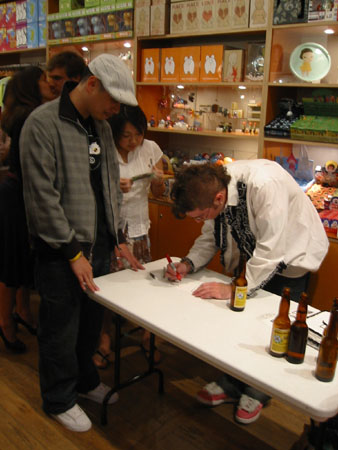 Buffmonster’s art is part of the microcosm created by the designer toy movement which was launched in 1997 by Hong Kong graffiti artist Michael Lau who turned a handful of GI Joes into customized hip hop street fashion figures. 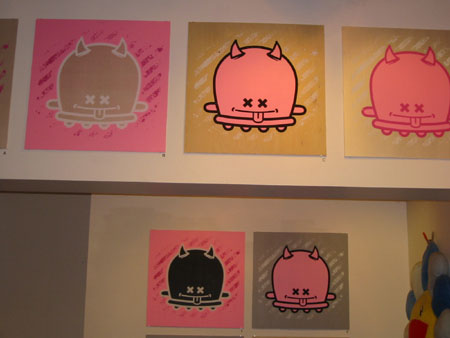 Kidrobot started out as an online store dedicated to these designer toys in 2002, and soon launched retail stores in San Francisco (2002), New York (2003) and LA (2004). Featuring artists from the UK, the US and Japan and creating own exclusive toy lines, Kidrobot is the place where pop art meets designer toys, Skateboard deck designs and various other lifestyle accessories.