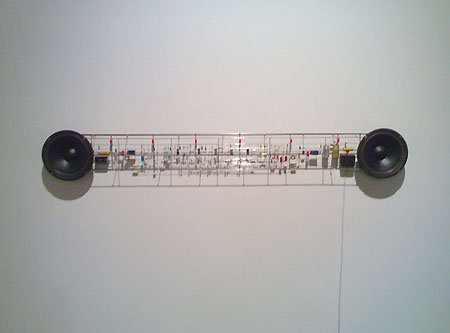 Peter Vogel (b. 1937, Germany) is a pioneer in the field of interactive electronic sculpture. He was formally trained in Physics, but has explored technology’s intersection with dance, musical composition and visual art since the late 1960s. Vogel’s minimalist musical compositions share territory with that of Detroit techno, Phillip Glass and Steve Reich, where variations and increasing complexity result from the addition or negation of repetitive phrases. This exhibition highlights new work by Peter Vogel in addition to covering the range of his production since the early 1970s. 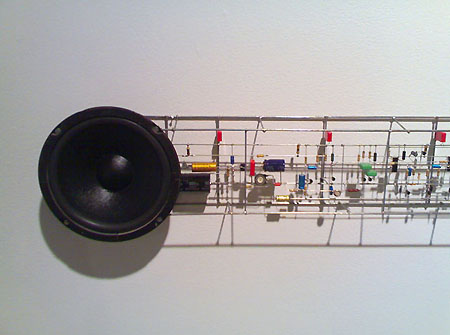 Vogel’s interest lies in both interactive and musical structures. His is an active art that encourages viewers to discover communication structures through repeated interaction. Red, green, and blue light-emitting diodes, wire, photo cells, bare speakers, resistors and capacitors are the raw materials with which Peter Vogel crafts audiovisual constellations. The interactive sensitivity of Vogel’s constructions utilizes photocells and microphones that react to spectators, creating an experience of seeing and hearing unique improvisations triggered by light and shadow. Merging form and function, the delicate electronic circuits in Vogel’s artworks are elegantly arranged.