The Design Confederacy is made up of about six individuals who all bring their own unique skills and talents to whatever project is being worked on, a bit like the x-men or something. The core are Joseph Salerno and Nick Warden. They have been working on a spoof documentary called “Legalize Murder” about a fictitious Black Metal band of the same name. 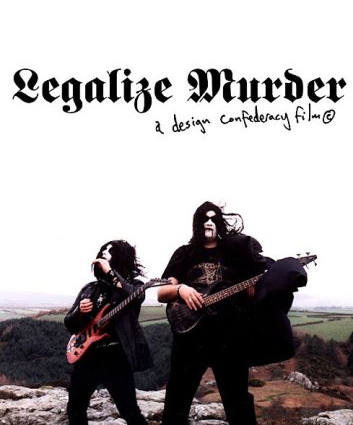 In the early nineties, with a spate of over 77 church burning plus reports of murder and suicide, Black Metal was possibly the most feared musical genre on the planet. It’s furious pace and sensory assault, through to its grim and sombre philosophy and ideology, has never left much room for humor. However, being so far flung from reality, the door was wide open for parody and satire.

Set in 1990, “Legalize Murder” follows Dominic Dalrymple, pop culture journalist (Nick Warden) on a journey through time and space. He stops over for a week with Welsh Black Metal artists, Vic Norseman (Joseph Salerno) and Jack Norseman (Phillip Adams), to investigate the greatest threat to civilisation as we know it!