Two large oil paintings by Washington artist Andrew Wodzianski hang on the other corner of the gallery. One may ask: “How is this most traditional of genres fit in with the technology?”

“It’s all about the Internet and cell phones,” responds Wodzianski, who uses Yellow Arrows web technology to have both voice mails and text messages deposited directly via the Yellow Arrows to his paintings. Dialers can then call in and listen (or have the comments downloaded to their phones) to the opinion of the hundreds of people who have commented on Wodzianski’s works. “It’s immediate feedback from the public.” 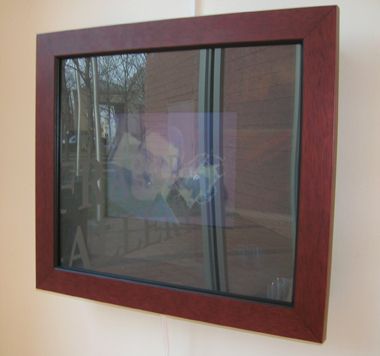 The last artist in the exhibition, Philip Kohn offers two works that may provide a future peek at what technology will deliver in self-portraiture. Using two custom made software programs, Kohn has assembled two pieces that hang as a painting would. Stand in front of the works, and a hidden camera on the work itself records your image and begins, on an almost random basis, to marry it and re-interpret it with the many other images and people who have stood in front of it over time.

Sometimes the image is a clear video reflection of the viewer; at other times, a disorienting amalgamation of images play across the screen, never the same twice in a row. The replayed imagery is only limited by the chip’s memory capabilities, and Kohn’s self-portrait accomplices record away (and store) the world in front of them.

A world where art, and technology, continue to become one and the same.