Being connected with the cover and the interview in SHIFT, “HIDEHITO SHINNOU EXHIBITION” was held at SOSO in Sapporo during the whole month of February. Undergoing a complete change from colorful and vivid “HUMANS BY MIKE MILLS” exhibits in the previous month, this month’s SOSO welcomed cheerful and pop fellows in pastel pink and light blue. 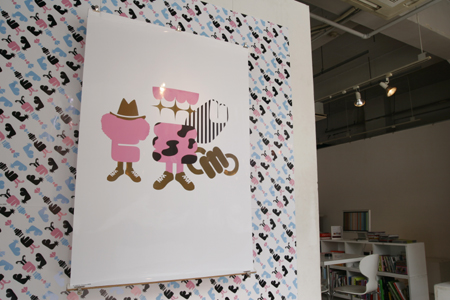 Hidehito Shinnou is a young graphic artist from Aichi, Japan. He learned designing at a shool in his homeground Nagoya, and currently working for illustlations while having another job, then the end of last year, one of his works was selected for SHIFT Calendar Competition 2006. If you are using SHIFT 2006 Calendar, you must had seen his graphic in February. If including SHIFT 2006 Calendar Exhibition, it is the second time that his work decorates SOSO, and at the same time it is his first solo exhibition in Sapporo. 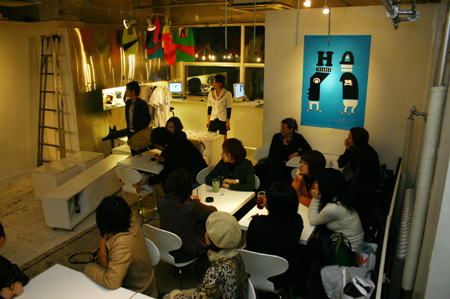 On Saturday 11th of February, while the “Sapporo Snow Festival” was about to reach its climax, there was a live performance event with Hidehito himself. It had already passed more than 10 days after displaying his original large-sized posters and cute T-shirts at SOSO and having his pleasant SHIFT cover animation on the mac screen. Nobody could expect what kind of performance he would show after that on the big white wall in the center, and Hidehito also hinted at its improvisational with the interview “I would like to enjoy drawing while reacting on what I drew at the venue.” Character painting? Collage with his original motives? The event started with everyone’s expectations. 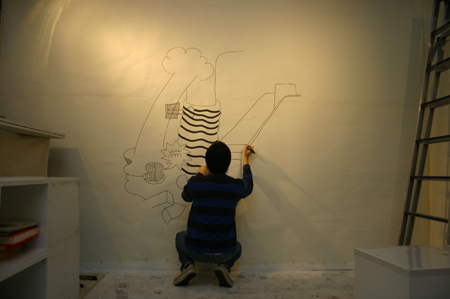 It was a black marker that Hidehito picked up in front of the white wall. He faced to the wall for a while having everyone’s attention, and all at once, the mountainous lines appeared in the center. “I have been getting interested in lines and it has been my basis,” said Hidehito in the interview. His style with lines were developed with hand drawing in monochrome througout a delicate nuance of thin lines, thick lines, curved lines, straight lines and dots. 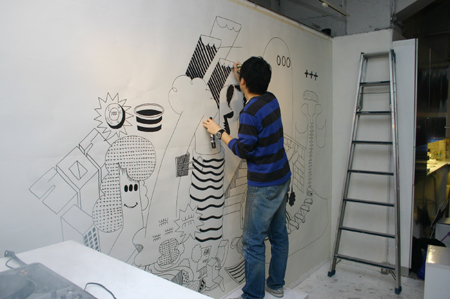 It’s fast! This might be the first thing everyone was surprised at. It was expected to take a long time to fill out the space in approximately 2.5 x 4m just with a marker, but jumping to the conclusions, it was achieved only in 2 hours. Starting from the center, the drawing added various motives around like a chain reaction making rapid progress.