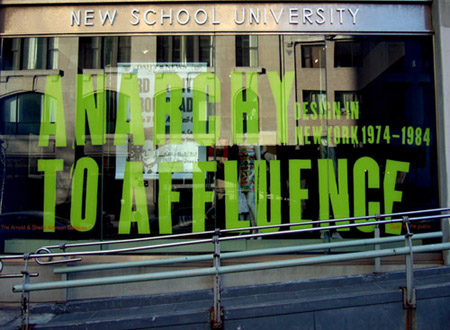 Anarchy to Affluence: Design in New York, 1974 -1984 is an exhibtion currently hosted by Parsons school for Design. It takes a glimpse at a time in which New York spawned a creative community that has left an endellible mark on the city. The exhibit covers the areas of fashion, graphic design and home decor, all of which reflect the experimentation and creativity of this time. It was a period when Artists, designers and musicians were contributing to a highly volatile and expressive climate and New York, shunning the conservatism that had swept through America in favor of a more expressive approach. 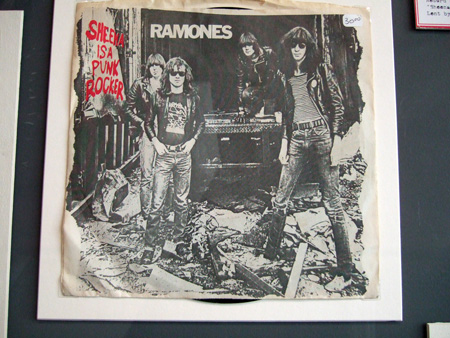 Printed ephemera for bands like the Ramones, cover sleeves for the Sex Pistols and Patti Smith are exhibited. They all display the low-tech production process of photocopy machines and rudimentary cutting and pasting that became the trademark of this era. Texture found its way into everything and demonstrated upmost disregard for anything carefully managed or too orderly. Derivative of the music that the design was portraying at the time it was more about doing things manually and not caring about doing what was expected; especially print design “Glossy production values and fancy typography were shunned in favor of improvised dadaist collages that mirrored the in-your-face quality of the music”. 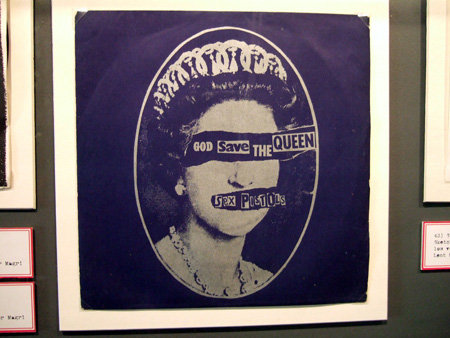 Also on display are outfits designed by Stephen Sprouse, Betsey Johnson, Norma Kamali. Each designer in their own right trying to fashion their creations with materials, patterns and cuts that only a punk would get away with wearing! Sprouse took immediate inspiration from the city by applying razor wire, chain-link fencing, bullets and graffiti as textures to a lot of his creations; Kamali emphasizing the anti-establishment approach by using low-budget materials like paper and parachute fabric for her outfits; and Harry Parness and Nicola Pelly’s creations characterized by massive shoulders, small waists, lots of velcro and zippers, designed to accomodate a “new way of life”. 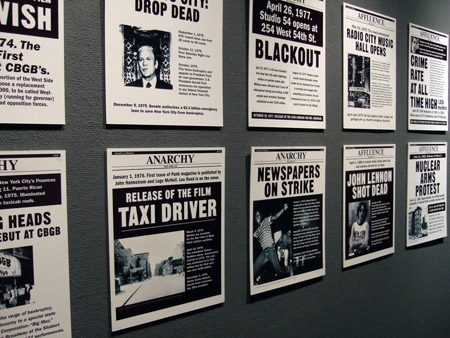 And it was a new way of life, New York at this time between 1974 -1984 was a turbulent period for the city. It was synonamous with a huge economic slump to the point where the city almost declared bankrupcy, mass unemployment, crime, drug abuse and general lawlessness in the form of street gangs put New York into its spiraling decline. A wall of Tabloids of that era illustrate some of the realities the city was facing; The 1977 blackout that incited widespread rioting to the shooting of John Lennon in 1980 which helped highlight the 1,826 homicides in the city during that year. Characterized by the films such as Taxi Driver and Looking for Mr. Goodbar, these films illustrated the gritty reality and social tensions that existed. The aesthetic qualities that these films relied on for their texture were very apparent in New York and this visual palette of anti-establishment and vulgarity was spilling over to other areas such as music, design & fashion. The aesthetic of the time was said to be honed by “anything your parents would find insulting”. Artists shunned anything that was deemed “corporate” or “safe” and were lucky enough to take full advantage of the cheap, industrial living in downtown Manhattan, often taking over huge loft spaces for next to nothing. 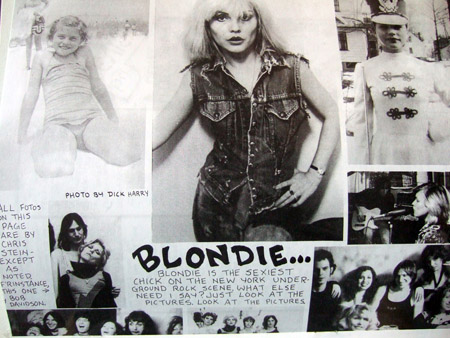 Blondie through the years

It may sound silly but I can’t help feel a small bit of sadness that these monumental times have long gone and have been replaced with the sanitized safe haven we know as New York today! I grew up with images of New York on TV as a lawless, cold blooded place that you’d be lucky to live through if you were stupid enough to be caught up in it! By todays standards this image has been literally scrubbed clean. Most of the city’s inhabitants will have either forgotten or simply won’t know a time when it was a free for all in terms of widespread crime and unrest as well as creativity that was just as prevalent. I can’t help wonder what it must have been like to be in New York during this era and think about how much of the “soul” has vanished in the clean up that has seen corporate America take root and thrive like the art once did. 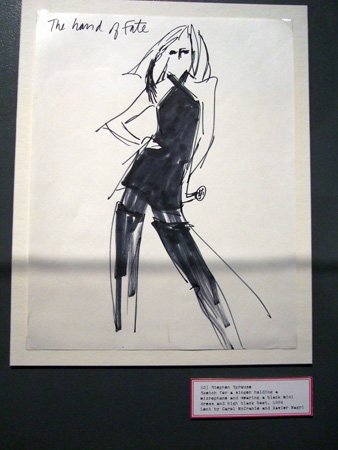 As for the exhibition, personally I would have like to see audio visual components on display alongside the art & design that was there. Music and video would have added another layer to the show, the lack of it being very apparent for me. Still worth a look though!