At the corner of Gower & Sunset street across from the Sunset Gower Studios in Hollywood, originally established as the legendary Columbia Pictures Studios, is a small western themed shopping center named “Gower Gulch”, This center is named after the history of this Hollywood intersection. So many want-to-be movie actors used to hang out here in search of work, dressed in cowboy costumes, that the area was nicknamed “Gower Gulch.”

The Gower Gulch is a perfect example for the immense diversity that is typical for the Los Angeles area. As part of a country themed small shopping mall, the Gulch holds a Karaoke Bar, a Sushi Bar and a restaurant with a stage and dance floor all in the same building. 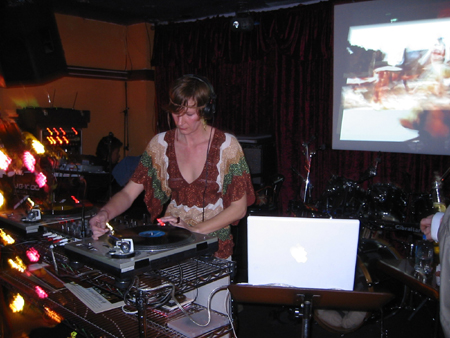 On this special night, DJs and several dance performances had been arranged to entertain the diverse crowd. DJ Lady Fingered showed a good selection of rare 60s Soul & Funk to get the crowd started. Besides her gig as a DJ, she is also a professional and passionate writer, as well as famous music journalist, writing for such magazines as Flaunt, Angeleno, Dazed & Confused and Complex. She has also recently published her second book, an intimate biography on the influential Country-Rock Musician Gram Parson. This night, her 60s vibes got everybody in the right mood, to enjoy the extravagant dancing performances that were to come. 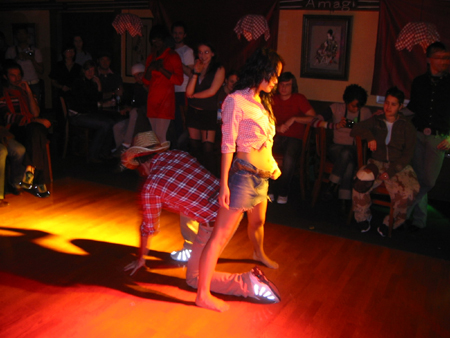 Starting out by a sensual dance duo, the dancers paid tribute to the location by choosing western themed outfits for the show. Drawing on the long co-operation within the group, the dancers showed a professional performance, although the rehearsal for this event only started 3 days before the show. All of the dancers belong to the famous Hysterica Dance Company which has been co-founded by Ryan Heffington who has choreographed the dance and also dances the duo and the later performance himself. The mixture between traditional country dance like elements mixed with a very modern and abstract approach would be strikingly enough, but the moves are exercised so sensually that you can almost feel the intimate touches of the dancers, filling the air with a certain kind of “dirty dancing” atmosphere.