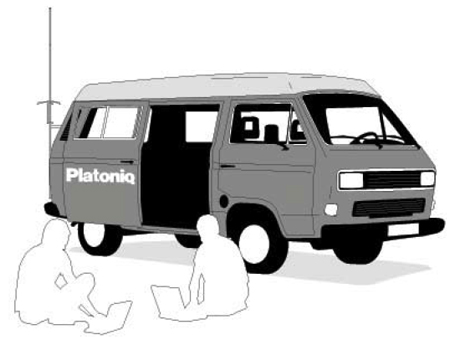 Platoniq is a Barcelona based group of cultural producers, curators and software developers. Platoniq’s main interest are community building tools, social software and networked strategies for public spaces. Platoniq works in different areas by the mixed of technical computer knowledge and social interests, resulting in a number of independent community media projects.

One of Platoniq main projects is his independent Open Source Radio Burn.Fm. The freshly re-launched net-radio formely knows as radiored.org.
Burn.fm is an on-line channel dedicated to independent electronic music and open source
radio. Burn.fm is a sub-channel of OpServer project supported by CCCB, our open streaming server dedicated to audio Culture and politics. Opserver.org and burn.fm are based on free software.

In order to present to the public and share information sources, Platoniq have create the Burn Station who work as a Mobile Copy Station.

Burn Station is an open source, copyleft model project, an experiment in practical gift economic aiming to reflect on the understanding, sensibilities and entry of ‘Open Source’
ideas into other social, cultural and artistic practices.

The starting point is the development of a system of distribution as a mobile self-service.

The mobile distribution unit consist of 4 computers connected to a local server. The system is managed by free software wich has been programed for the project and is published and distributed under the GNU GPL Licence.

Platoniq worksin different areas: the organization of events related to culture and technology, the creation iof documentary contents for TV and Radio in Internet and the development of public tools (database and software for public use).