A regular contributor of InfoWorld NYC, Garry Waller interviewed artist Andrew Sutherland about his sculptural works, who’s use of unconventional materials and construction methods have become his trademark.

Andrew Sutherland is a self-taught artist, living and working in Brooklyn, New York. I saw Andrew’s work for the first time in a small gallery on the lower east side about a year ago and liked his bold, highly graphic approach and also the way he examines the use of unconventional materials to fabricate his art. For this article I was looking forward to meeting Andrew at his Brooklyn studio to find out more about his work and see how he goes about creating it. However, the day I was supposed to see Andrew the New York subway ground to a halt and the Subway’s workers promptly walked out on strike for three days – great! So instead, I emailed Andrew with a bunch of questions which along with the pictures hopefully paint a descriptive picture of him and his work. 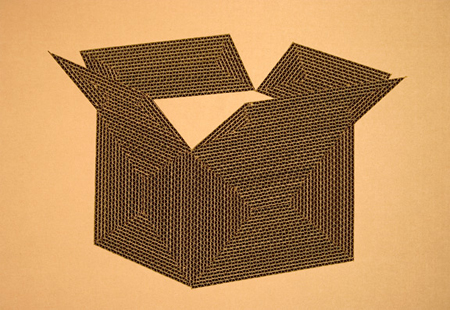 What’s your backgound? Did you study art or come from some other discipline?

I studied some art in school, but I mostly consider myself to be a “self-taught” artist. In third grade my father bought me “How to Draw the Marvel Way”, a tutorial drawing book by Stan Lee, this book had a huge impact on me. I focused a lot on shading and drawing 3-d forms. Also, my father was a DIY carpenter type, but a very creative one, he seemed more like an artist to me. I would often work with him renovating houses and various projects, learning many things along the way. Soon I learned how to apply those skills to my own projects, like building skateboard ramps and forts. Years later I’m still drawing from those experiences in making the artwork I’m involved with now. 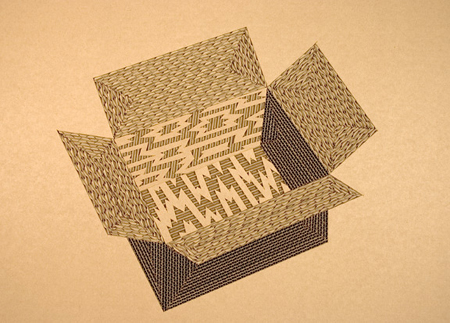 How would you describe your current work and where do your ideas stem from?

I’m going in two directions at once with my new work. In one direction I’m working with past ideas and techniques, combining and blending them together to create something entirely new. I think this work will be looser and visually busier than anything I’ve ever done. The other direction is more a continuation of my past approach, where I work with one concept, and the final product is more minimal in nature. 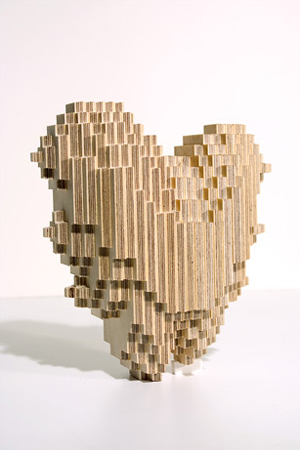 Can you explain a bit about the common thread that ties all of your work together (color, shapes, materials etc)?

The common thread is my selection and use of materials. I use materials that I think are visually and/or conceptually interesting, and that I can somehow modify in an interesting way. With cardboard I peel select areas of the top layer away to make it look like wood grain. More recently I’ve been working with an inlay technique to create the image of an open box. I like the way these pieces say something about the material. It’s like unlocking a hidden dimension within them. 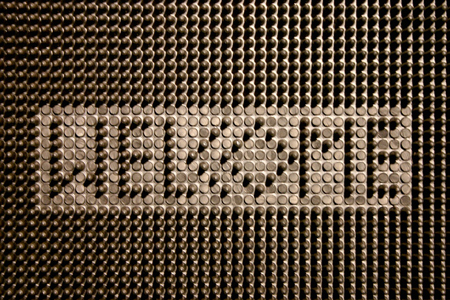 Which came first…the painting or the plastic?

How did the idea to use plastic come about?

Several years ago I started mass-producing a series of small sculptural plaques based on three cartoon-like shapes taken out of my sketchbook. Originally I was cutting each one out of wood, and hand machining it into the final piece. This process was too time and labor intensive, so I turned to plastic as a way of speeding up that process. In essence the idea to use plastic came out of necessity.

Can you explain a bit about the process of making your plastic work and what it involves?

I don’t have formal training with mold making and casting, but I think my process is similar to the traditional approach. I start by creating an original, then make a mold from that. Once I have the mold, I use a two part liquid plastic to make the castings. For color, I have a technique that involves pouring the paint. This gives it a very smooth, seemless finish, as if from the factory. If you look at the back of the pieces it’s apparent from the fingerprints and drips that they’re actually handmade. In theory it seems like a simple process, but there are actually a lot of unseen steps, and takes a long time. Because of this I haven’t been producing then as much, and am thinking about having them outsourced. 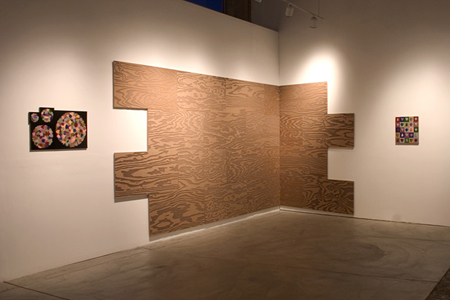 Is the process part of the appeal or is it more about the end result for you?

I love the process. The process is also where a lot of my ideas are conceived. I, however, am a very visual person, and therefore also place a large emphasis on the final product. I guess it’s something like a relationship were one can’t live without the other. I’m not so much the type that can dream up something out of thin air, but I admire that type of artist. I would be interested in a balance, having some things fabricated for me, but also continuing with the hands-on work that is natural to me.

How do you see your work evolving and what’s next for you?

I have a tendency to over-edit my ideas. I’ll find great things in my studio that I’ve made, but that I never fully developed. I want to share more of these ideas with people. I feel that my future exhibitions will be more eclectic, showing a wider range of ideas and work. I’ve had several exhibitions in the US, and I feel that my next step to get my work out there on an international level. I’m currently researching places to show in Japan and Europe. Also, I’ve been thinking a lot about making a book.

What artists’ have influenced you?

See Andrew at work in his short film “Formation”, a behind the scenes look into some of the methods and techniques that go into his work: andrewsutherland.com.