Entering the Albany Bulb feels a little like trespassing on private property. The paths are not paved or clearly defined like other bay-side parks – it’s raw, overgrown, and strewn with industrial refuse. As you travel deeper into the Bulb, the unmarked paths begin to splinter – some tunnel into brush while others dead end or circle back. Ultimately, you reach the west most point of the Bulb, a shoreline facing the Golden Gate Bridge with sweeping views from the Bay Bridge to Angel Island. It’s here that you begin to notice the art. 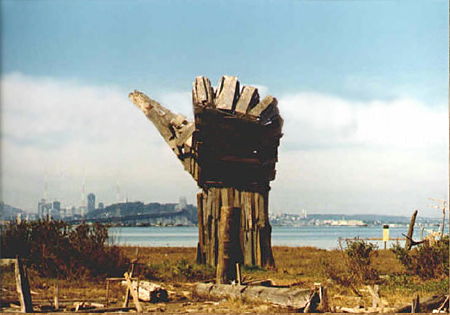 Even without noticing the bevy of art and sculptures, this is a breathtaking place. The first structure most notice is the Heart Castle, an odd building assembled from discarded cement and painted in vibrant colors. Wandering north, the art strewn about becomes dense, revealing unusual modifications to the landscape in all directions. 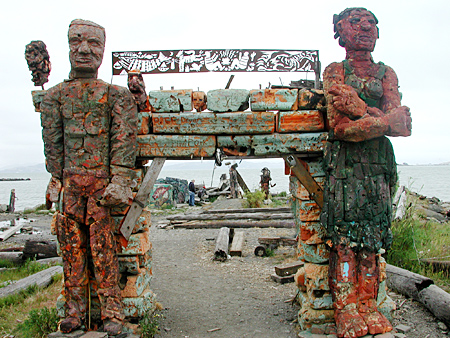 Arch of Sniff (made from salvaged styrofoam blocks), Sniff

The east shore of the San Francisco Bay has long been a draw for scrap/salvage artists. The Emeryville mudflats, an area near the Bay Bridge, served as a purveyor of raw materials and a highly visible public display space for large scale scrap sculpture. A freeway expansion in the late 1980’s cleared the mudflats and sent artists looking elsewhere. One location was a few miles north – a place called the Albany Bulb.

The Bulb was built as a dump and considered too toxic to develop. Changes to waterfront environmental laws in the late 1960’s prevented continued dumping, so the Bulb had been sitting unused for 20 years. Rich in scrap building materials from the dumping days, the location is ideal for scrap artists. 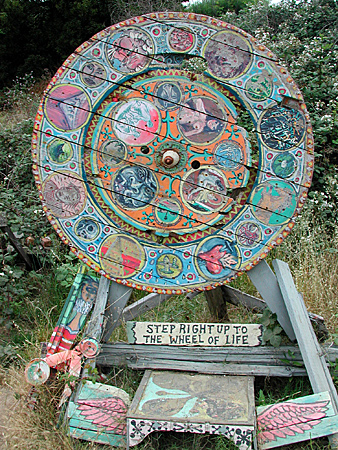 Artists have been using the Bulb since the 1980’s, but the past 5 years have seen a proliferation of art. Odd structures, large scale sculptures, and colorful murals appear at a dizzying rate. No two visits yield the same finds. A collective known as Sniff established themselves as the most prolific of the Bulb’s ever expanding artists. The entire northwest corner of the Bulb serves as a "gallery" to Sniff’s work, where large murals line the pathways. Rumor has it that Sniff stopped contributing sometime last year due to the increasing controversy and unclear destiny of the Bulb.