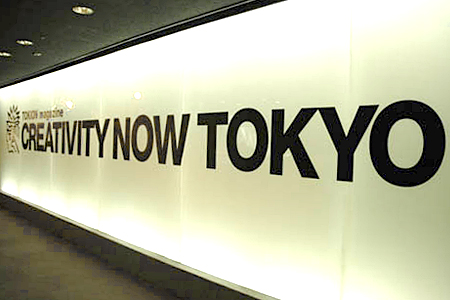 I found it was already a chilly day when “CREATIVITY NOW TOKYO” took place at Laforet Museum Harajuku on October 23rd. Last year, there were many interesting hosts and panelists, including, Yuuya Uchida, Hiroshi Fujiwara, Nagi Noda, and Terry Ito. This year, we had “Media Rapist” Naohiro Ukawa and an aggressive neuroscientist Kenichiro Shigeki as new hosts.

In addition, Itsuji Itao, Kazuo Umezu, Nameko Shinsan and Seiko Ito joined the panel this year, so we had no idea what would happen in the beginning of the conference. In fact, a creative director Adam pronounced “Let’s enjoy using our brains and have much more fun than any parties, and be cautious of teething fever!.” Well… it was such a dense day for me. My brain was actually burning with that fever! (More details will be covered in TOKION January Issue! Don’t miss it!) 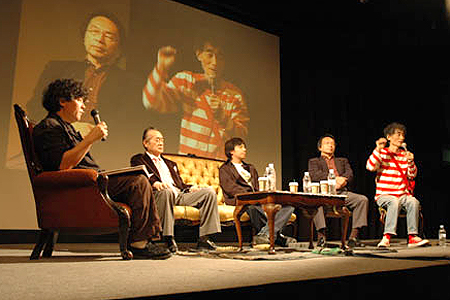 An anxiously awaited opening panel was titled “Brain Safari Park.” An Ig Novel prize winner, a capping verse grand master, a video art pioneer and an electrifying manga artist gathered and talked on the stage for an hour. The tension of audiences could not stop rising.

Dr. Nakamatsu’s jokes were impossible to tell whether it is true or not, and Kazuo Umezu was bursting in on Nakamatsu’s talk with his familiar hand sign “Gwasi hand.” At the same time, there wereToshio Matsuokoa who was giving them a cold askance look with saying “It’s foolish to talk boring talks” and Itsuji Itao who got lots of laughs by minimum talks and gestures. The host Mr. Shigeki was almost helpless saying “I shouldn’t have accepted this host role.(laugh)” because when a simple question like “What is creativity” comes up, each of the four is totally different from other three and each has an astronomical contrast against the other. So, this opening panel made me to expect an intense day and my brain was getting ready for it. 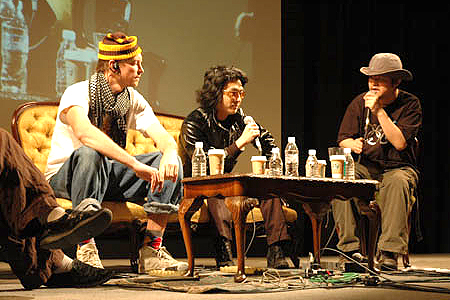 Subsequently, the next session “Beyond Reality” took place and the panelists were Henrik Vibskov who is popular among fashion geeks, Motohiko Kotani who was a rep for Japan exhibition in Venice Bienniale. and Naohiro Ukawa who had cold that time and it was getting worse with the teething fever of the conference. One of them said “Ladies can fire laser beam and how we can think about aura in this context.”

“Popular in Japanese writes as people’s aura, but an individual who has aura should have its circulation system” said Mr. Ukawa and I really gave him a nod. It says that in order to have a heart-tugging catch ball of hearts between a creator and a receiver, both need to have the same level of creativity. I think that with this “real” circle, there generate a healthy culture for us. 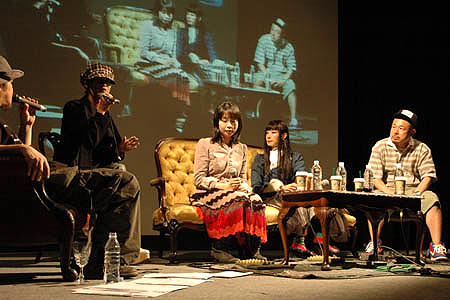 In the next session “Welcome to the world of heroines” , Novara Takemoto who slogans “Maiden equals hard-boiled” was absent because of oversleeping, there were Nameko Shinsan who uses a thrilling set of vocabularies, an eternal maiden Sayoko Yamaguchi, and a hunter of cute girls Kousei Yonehara came onstage. Point by point, Information about where is Novara was becoming snarled, panelists illustrated the ideas of “maidenness”, “fate” or “anti system” bit by bit.

Novara finally arrived at the session right before its closing.She was addressed by Ukawa and Novara replied her saying “Maidens are anarchists!” I was impressed becasue Novara made a great synchronicity to Ukawa’s address without attending the whole session. It certainly showed Maiden’s hard-boiled way of life that was created in the system where people cannot escape from sexual differences, and I understood somehow that this way of life is nothing but creativity. 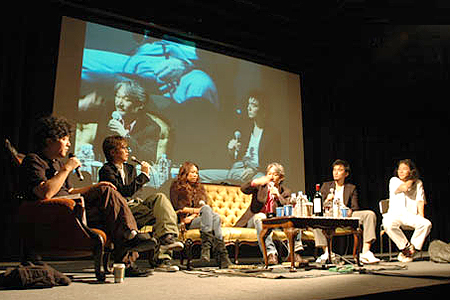 After an intermission, the conference restarted with “We don’t need catalogue magazines!” session. We still remember last year’s gamy session between HIroshi Fujiwara and Takeshi HIrakawa. This year for this session that races around Tokyo’s fashion scene, Masato Ochi, Yoko Morimoto (ex109’s “Karisuma” charismatic fashion consultant, now a producer of Moussy), Fumihiro Hayashi(Editor in chief of DUNE), Kanya MIki (a fashion designer who graduated Belgium’s Royal Academy of Fine Arts top on the list, and Nozomi Ishiguro (a fashion designer who holds guerilla fashion shows around the world), gathered on the stage. From “Gal” to “mode”, it was surely a mixed and fancy lineup.

When they were talking on the topic about “What is creativity?”, the host Mr. Shigeki raised his voice saying “That’s why Tokyo’s creative scene sucks!” Mr. Shigeki hit on Mr. Hayashi. Mr. Shigeki asks “Why don’t you explain for people who are unfamiliar to this industry!” Mr. Hayashi says ” We have no choice because it cannot be explained in words. People’s conscious minds are also important.” More details will be covered in the magazine, but a communication between closed/open industry’s context and a more sensitive context between being able to verbalize and not-being able to verbalize blurred into each other. However, if audiences wanted this kind of lively time, this was truly today’s highlight moment.

While all of this was going on, the topic moved to the last question “What can we get inspiations from?”, and Mr. Ishiguro answered “A part of egg where is pur pur and glaze of hormone”. Mr. Ishiguro’s answer calmed down the stage and charmed audiences out. 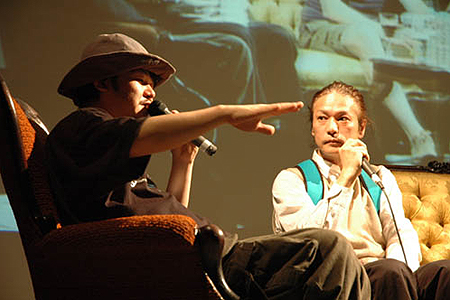 At evening, there were alcohols on the table. In addition, Norimizu Ameya and Jonny Hardstuff whose shocking video works caused controversy, and a Tokusyu-manga-ka Takashi Nemoto took the platform. The theme of this session was “whole body performance artists” but its hidden theme was “sperm”.

In one of Mr. Ameya’s works “Public Zamen (sperm),” it actually made a sale on Ukawa’s sperm. Therefore, there was a serious talk like “I see potentials in sperm.” and a fiction talk like a one in Sumo wrestler’s house “When there is a fight, let’s souse sperm.” They made a situation on the stage where “sperm” is dead certain factor to start with. I thought that is a rare feat what these whole body performance artists can take on. 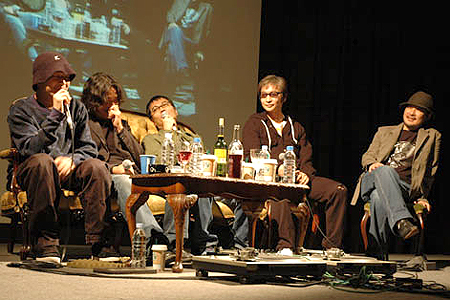 The final session was “Tokyo System Crash” with Suchadara’s ANI, Seikou Ito, Kan Takagi, and Moodman. Starting with the discussion of “FU-EI Law” that transformed drastically nights of Tokyo, they talked bunch of things and concerns, including, “why Casinos are OK, but clubs are not?” and drew a rough sketch of Club people vs Taiyo Zoku. I think they talked not only about Tokyo’s club scene but also they brought this as a case study for us to treat it as alarm bell.

Mr. Iso says that “The imporatnt thing is what comes along with dancing.” In these days, the boundary between what is legal and what is not has defined based on stereotypes, and the boundary became unclear. Each of us should have an independent identity and communicate with others that brings us a dynamic power to restore the system. The key to actualize it is “creativity” and its creations become “culture” in the future. 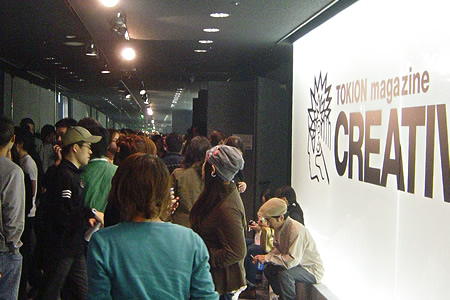 After all that manner, a long tough day finished. At the after party, Moodman was DJing each song with his own detailed commentary. Distracted audiences started feeling better and chilling out. Eventually, smiles returned to their faces. It seems that everyone was having good time and feeling comfortable.

As same as last year, there were sessions that would be more engaging or interesting. However, the essential quality of “Creative Now” is its panelists’ casting that fueled audiences’ unlimited expectations. When there was such a group of distinguishing panelists gathered together, there was no way that could be finished in an hour and half. Therefore, some audiences still felt unresolved and went home without calming down fire sparks in their mind. However, this makes their creativity continue to grow and it will make Tokyo’s culture scene ever more upbeat.