DesignEDGE Conference & EXPO 2005 was held in Singapore from November 10th to 12th. This was the kick off to Singapore’s national project Singapore Design Festival. A Hon Kong based design magazine IdN was in charge of production and curating the the expo. In addition, Delta, Mo’Wax, and Rostarr who are renowned in the street scene participated in the expo, and Kazuki Kuraishi and Devil Robots from Japan, UVA and D-Fuse from digital film scene, and design mogul Designer’s republic all joined in the expo. 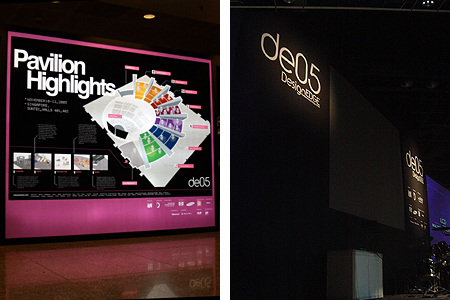 Singapore takes design as a national strategy to become a design trendsetting city in Asia. Singapore Design Festival was held from November 9th to 23rd, and it was a much-awaited large scale festival in one of the biggest business cities in Asia.

During the festival, there were many conferences and talks as well as Design EDGE in various disciplines, including, AD ASIA 2005 and Beyond 2005 that looked toward the next leaders of creative industry, and other culture, business, academic related events that made possible to generate interdisciplinary communication. When we take a look at the array of guests at the festival, we must realize Singapore’s genuine efforts for the festival. 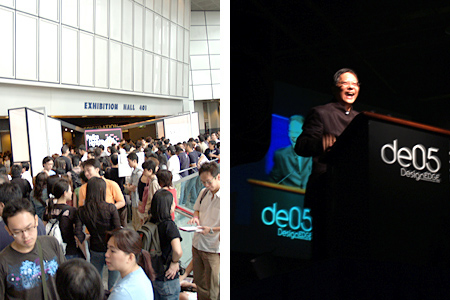 DesignEDGE was held at SanTech International Forum. It was a festival for design geeks, and its lobby was heavily packed with young geeks who were starting to get excited. The conference hall was immediately filled to the capacity, and the chairman of SIngapore Design Council, and the president of IdN Lawrence gave greeting speech to the audience. “The revolt and new perspectives of guest designers play a decisive role in contemporary creative culture, and this conference indicates to us a process of its revolution.” The conference was to discuss about “What is cutting edge design?” and “What kind of processes are involved?.” The three days of vibrant discussions were finally kicked off. 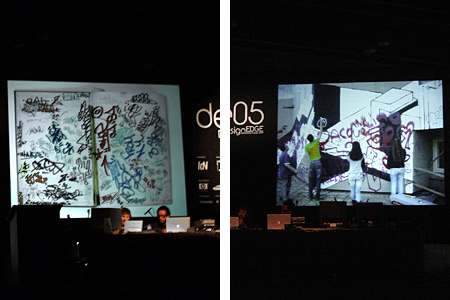 The lead-off was taken by Delta and Mode2 gave a talk with rhythmic style and showed his mastery in image tracing. Delta showed not only his successive works but also works by Keith Haring and sketchbooks from 80s with Zephyr tags on it. Delta introduced his recent project that he “buffs” (to erase graffiti.) Any civilians can “bomb” on Delta’s black and white graffiti works. Later, Delta draws on it again, but somebody will come to bomb on it again. This process is repeated by Delta and civilians many times. It is like a rat race on a legal wall, and graffiti acts as a communication platform in this process.