Wabisabi, a design unit, whose stronghold is in Sapporo just same as SHIFT, did the SHIFT cover this month. You may know they released their original card game “CROW&TRASH” from SHIFT Factory before. This July, they held an exhibition for three weeks in SOSO cafe and they also took part in the exhibition in Frankfurt, Germany. They extend their work all over the world. 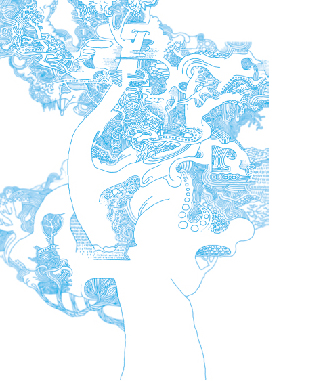 “Wabisabi” is a design unit, consisting of Kudo “Wabi” Ryohei and Nakanishi “Sabi” Kazusi. We formed it for our creative work in 1999. We first met 20 years ago. Sabi joined the design production for which I (Wabi) worked. Then, I started to work as a creative director, art director in an advertising agency. SABI also started to work with me on 2 productions. We saw each other again after these long experiences, and we started to work together, as a director (Wabi) and a designer (Sabi). Our main work was to make advertisements for tenants of fashion buildings. I got to think I wanted to make what I really want, without clients’ wills, and I asked Sabi, and started Wabisabi for our original work. 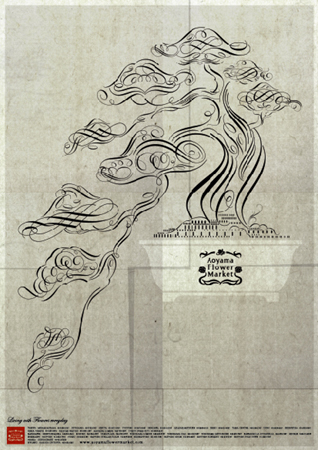 What’s the difference between “HOME” and “Wabisabi”?

“HOME” is a designing production which I (Wabi) made after I quit the advertising agency. We work making advertisements mainly. We deal with CM, magazines, newspaper, traffic designs, and whatever. Actually, there is no difference between “HOME” and “Wabisabi” in our will for great works. The only different thing is that “who thinks it’s a great work”. “HOME” works for clients to make attractive works for consumers. On the other hand, “Wabisabi” works for “Wabisabi”. The work is based on the idea “make what we want”. We both love our works. We may say that “Wabisabi”‘s main works are based in art. 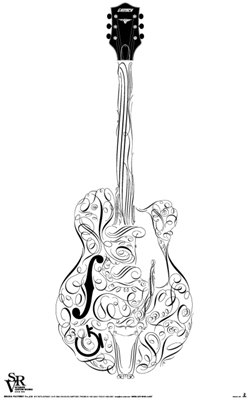 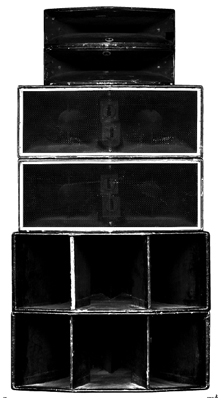 Could you tell us about the exhibition “Wabisabi + Ultra Graphics” held in SOSO cafe this July?

Ultra Graphics, a design production we love located in Tokyo. We met Eji Yamada who is an art director, a graphic designer and also the president of Ultra Graphics, when he came to Sapporo as a judge in a meeting held by Art director’s club consisting of young creators in Sapporo. Wabisabi got many prizes and pre grand pix there, and he advised us to join JAGDA (Japan Graphic Designer Association) with the great praise, “Wabisabi will go well not only in Sapporo, but also in Tokyo.” After the meeting, we kept in contact with him, and later, Sabi and Chiharu Kondo from Ultra Graphics got a new designer prize at the same time. I felt like we were in merrymaking!! Sabi will talk about this in detail later. By the way, this 3-week exhibition was given a changing theme for each week. 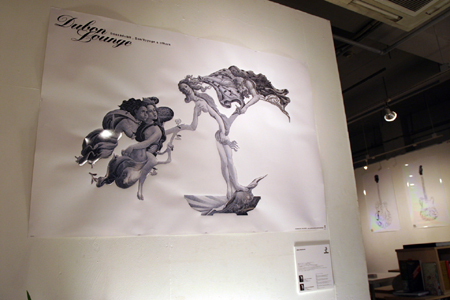 The first week was Wabisabi exhibition. The theme was music. We designed 5 electronic guitars using calligraphy. We designed them faithfully measuring 50 – 60s old guitars. We started this work by taking pics of instruments.
I (Wabi) am in a music band, and particular about instruments. I took pictures from head to body dividing vertically. The pictures we often see on a catalogue don’t look realistic, especially the head of the guitar looks small and has no impact. Therefore, I took seriously the feeling of scale and started with my personal Les Paul custom and original short horn of “dan-electro” which I brought from London.

Sabi didn’t have knowledge about instruments at all, so he studied hard in everything. He is a conscientious worker. He says he connot make anything without being convinced. Well, the motto of HOME is “DON’T THINK, FEEL!” though. That’s what Bruce Lee said in the movie “Enter The Dragon”, I decided to make it the motto of our company, and put it on the wall. Sabi improved his knowledge gradually, and started saying things like “It’s not a telecaster, but a broadcaster, isn’t it, Wabi?” as if the owner of vintage guitar shop, and I was somehow glad about it.

I asked Mr. Okuda, the owner of the vintage guitar shop SRV, to take pictures of the Telecaster and the Rickenbacker. And the ’59Gretsch was the personal belonging of Ryusui Cho, the owner of the tattoo shop “COOL STAR TATOO”. In 5 guitars, I made 34%, and Sabi made 66%. It’s always my job to stretch the strings last. I used my favorite “Eenite Bali 01”. This is all done on the computer though, you know. 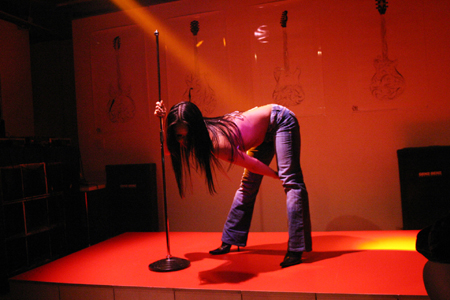 We filled the whole wall at the venue with 5 guitars and posters of PAs and speaker boxes which were popular in 70’s. In the opening party, we planned a secret event, a show for just 3minutes and 5 seconds. The plan was that the space darkened suddenly, and very loud “Shake appeal” by Iggy Pop was played, and one of the audience members started to dance. The song is like energy drink for me, and we played it very loud in the setting as if these speakers on the wall worked. The performance was by Megumi Kaneko, the dancer who works in New York and came back to Sapporo just to renew her visa by chance, was really great. She gave me goose skin. When I talked to her about this plan at first, she didn’t know about Iggy, and she studied really hard. I want to let Iggy fans over the world see her performance! It was really cool.