Exhibit goers were asked to choose five different colored ornaments, which were cut off in unique shapes by Ryuh. They were asked to put these on one of his clear panels hanging in the center. This performance was set up in such an enjoyable way that one clear panel made by the participants and three panels created by Ryuh were brought together at the end. The audience must increase their feelings or expectations toward the panels which incorporated their own work. Staring at the clear panel with colorful ornaments, they were pulled into Ryuh’s creation world. 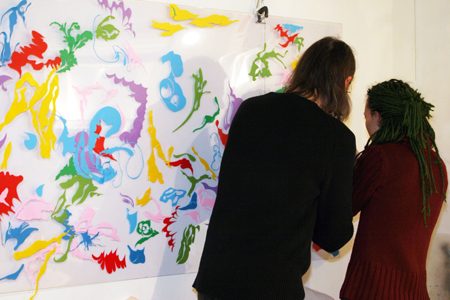 Most of the works by Tomoaki Ryuh have black accented motives and other clear and bright colors. Although these colors are not mixed with, they are complexly intertwined together in a face. Also, the lines are sometimes strongly thick and sometimes incredibly thin. It seems that silence and movement, digital and analog exist together. The coexistence makes a feeling of contradiction, discipline in chaos. 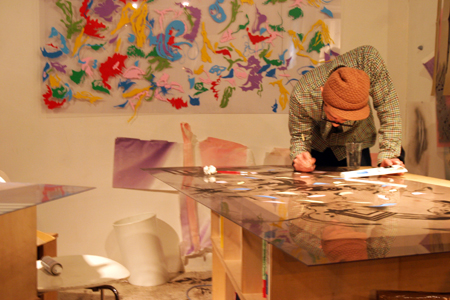 When I could see his works, the design was reflected in my eyes, linking with Shift, a gathering of independent individuals’ talent and with Sapporo, a city coexisting with nature. In this coincidence or inevitability, it was a discovery of the title of this exhibition, “SHIFT meets Tomoaki Ryuh“. 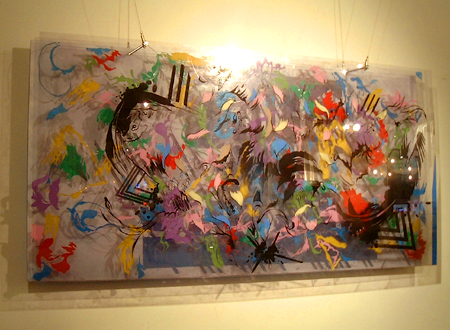 The opening performance passed the scheduled time. Because of the time, there were some participants who had to leave before the completion, but everyone seemed to be satisfied with his performance and his work. Four panels in piles were gathering all eyes in the whole place, and praising words came from the audience.

Tomoaki Ryuh just cannot be ignored as a notable artist in the future. Finishing his first exhibition in Japan, he will give people various messages throughout the world, shifting the light he emits.