There might be many surprised people when they find out that Masataka Kurashina, a custom painter, who collaborates with heterogeneous creators such as musicians and modern artists, has made a picture book. We cannot miss it!

“What did it look like? How did it smell? Where and how did it live? What did it eat?” – These were the questions surrounding the exhibition of original drawings from “DODO: Animals We Could Have Come Upon“, a picture book that describes the “DODO” an animal that became extinct by the early 20th century 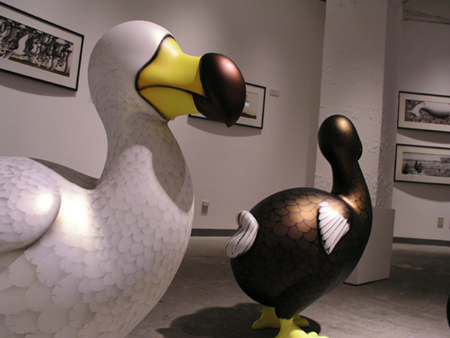 You are perhaps surprised at the mood, which is very different from his more typical sharp paintings. I’ve heard that this is also drawn in many layers of lines using air spray. In time, the lines become strong and bold. Or they make an endearing gradation that evokes a fantastic image such as a story. “I am told that this is output from a computer.” Mr. Kurashina himself says. Like that, its quality is high, so it can be seen as if it is made with a mechanical calculation. Even if you look at the original, you seldom distinguish that it’s made by hand. 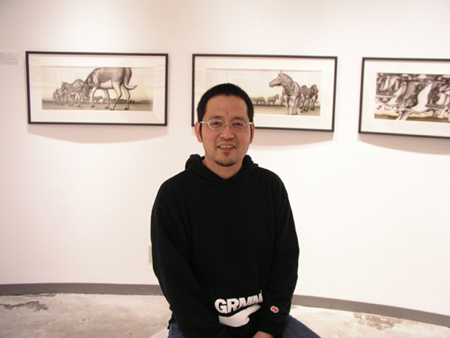 Mr.Kurashina, a former illustrator, started drawing this story about 8 years ago. Though it took a fairly long time for various factors to take place leading up to the publication, I heard one half of all the pieces were finished around that time. He says, “I love animals”. This is the reason that he chose an “animal” as the theme in this picture book. Though it seems odd, I felt that vivid figures of animals were represented when I saw a full sized dummy DODO and bowling pins of the Oriental Zodiac on the site. I guess that’s because of his love for animals. 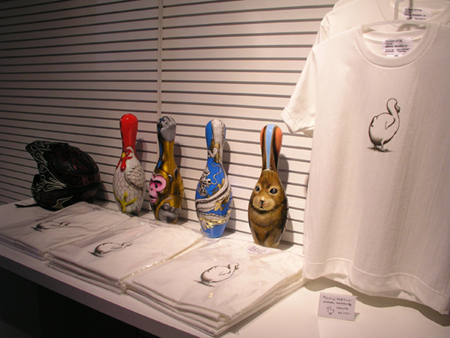 When I look back on his past paintings, it seems that he doesn’t simply add patterns but adds something like “an uplifting feeling” (Mr. Kurashina described it as an “organic element”). IT is, for example, the character of race driver for his or her helmet, and a sense of speed for a carriage (or something that covers a carriage). I think that they get something like a strong “driving force” from his painting.

The exhibit in Tokyo is now over and it will head to Osaka. This is a chance to see Mr. Kurashina’s work just around the corner, so you should go there. You will surely be startled.