It looks sad or depressed, but not pessimistic and even looks to have firm strength. You can’t help but have your curiosity aroused to know more about the creator. Norma V Toraya‘s work submitted for this year’s DOTMOV Festival are outstanding from the all selected works, as well she did the cover design for this month. Where does the unique world underlying in her works come from? We’ll look for the roots. 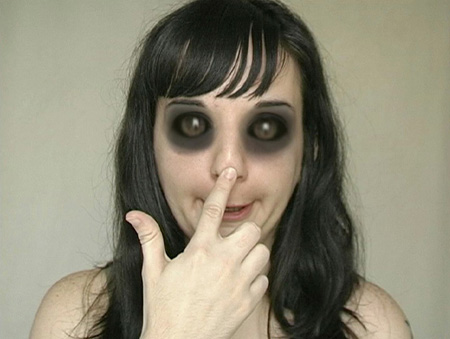 My name is Norma V Toraya and I live in Los Angeles California. I moved to LA to get my masters in experimental animation and have been working as a webdesigner/animator/flash/coder type person for 5 years. I lived in New York City for awhile and in Miami also where I grew up. I have been creatively working under the name Crankbunny telling stories through animation.

What’s your activity at the moment? What actually are you doing?

I animate alot and work on freelance alot. I don’t really have a social life beyond going to a tattoo appointment once in awhile and occasional dinners with friends. So alot of my days consist of me drawing, doing work on the computer, and answering emails as they come in. Sometimes during the week I also go into school to meet with my mentors. 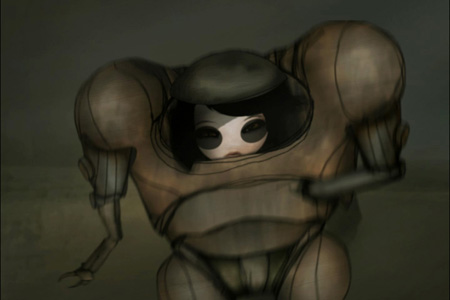 “Harboring Wells” is older – so I will start there. I read an article about this little boy who lived with his dead mother for a month. He covered her with a coat and notebook paper, went to school, cooked his meals, and never told anyone till someone eventually noticed something. The last name of the mother was Wells, and I was really fascinated with this event. I found it interesting that children sometimes don’t understand what death really is and how their innocence makes them deal with the situation differently. I also found this similar to how people sometimes live their lives harbored/trapped in fond memories. So this idea came up about living in this clouded loop of a good memory while reality might be totally different and horrible. That’s why I called it ‘Harboring Wells’ and had these two characters (one of them is disfigured and kinda dead). The main character kinda floats along sort of in this dancing daze – ignoring the fact this other person is dead. And then you have the reality of these spider things that basically come after the two. 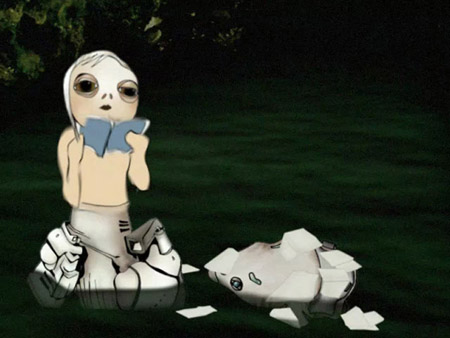 I intended for “Harboring Wells” to follow this track by Do Make Say Think which has a huge buildup. I also wanted the editing to stand out and work with the story. I worked the wrong way by animating a bunch of footage that I then edited – so it wasn’t approached traditionally where I had a storyboard and I then said ‘ok now I have to draw this and make this’ and move on to the next scene. I hoped by treating it like film footage and then editing it – it would feel more cinematic than animated. 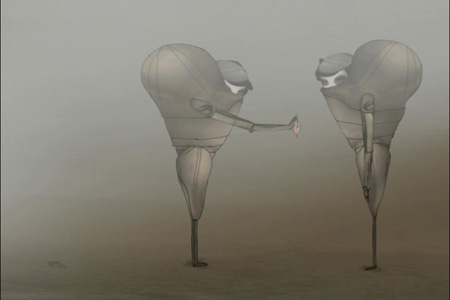 “Army of Me” was finished in March (2004) and it took a year to make. I took some time off after I made all the test shots to move out to LA and get adjusted to going to school for animation. The main idea for it came from realizing that I’m this person who’s really apathetic when it comes to relationships, so how funny would it be to flip it and make my own army of Norma’s with this aggressive powerful really focused agenda. Alot of people who know me (including myself) joke about how I am a robot because I work so much and for the most part am extremely organized and proficient in terms of delivery. I sometimes get tired of this joke, because its really horrible to think of oneself as this unfeeling – unemotional being. I’ve also become fascinated with desert landscapes and what they mean in terms of setting (it helps that where I live there is desert everywhere) so I shot alot of video footage in the desert that was them composited into the actual animated shots. I wanted Army of Me to be more about an environment than a story – it was difficult to structure so people would be left with atleast something of a story, instead of all these ambiguous episodes. I got alot of shit for the soundtrack I used – especially from faculty at school and what I call ‘older ears’ but it was just one source of input while I was making Army of Me. I also rely on input from friends, people I’ve worked with, my own sensibility, etc.