“A one word name refuses gender identity, martial status, socio-political or cultural and geographical identity by not separating the family name and the first name…” – Kimsooja

This last week in Milan has been one of the hottest of this year. What seemed could have finally been a mild summer is slowly becoming the usual torrid and sweaty season people expect this time of the year. And week by week the city becomes more of a ghost town, all the way to September when city life slides back to normality and to it’s everyday frenzy. 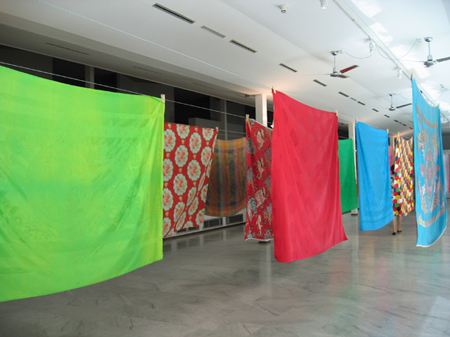 The first of Kimsooja‘s works in exhibition at Milan’s PAC (Padiglione d’Arte Contemporanea, the city’s Pavillion of Contemporary Art) is called Mandala, a readymade jukebox loudspeaker that emits the sound of Tibetan monks chanting. 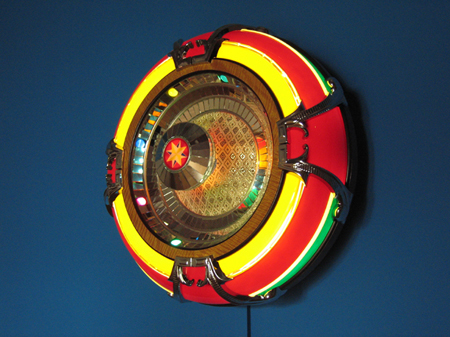 Mandala is a Sanskrit term which means circle, disk. It is commonly used in various Buddhist activities as a shape that represents the cosmos, but is also a proposal for contemplation and meditation. And the actual piece is a circular decorative structure around one of the jukebox’s speakers; but it could be a diamond, it could be an abstract vision of a cosmic structure, it could be a symbolic composition. It fits perfectly, in a natural way, between the prologue of emptiness, walking along one of Milan’s streets to reach the exhibition, and the epilogue of silence, on my way back home.

Being the part of a popular icon and a vehicle to pop music, many of us will recall having spent, sooner or later in their life, a couple of coins to hear their favorite teenage hit. This popular dimension seems to be close to the transcendental nature of the piece, its iconic value is so strong that it seems to be immediate. There seems to be more to feel than to understand.

It’s striking to see how a detail of a typical american icon can appear deeply rooted in an eastern aesthetic, a similar approach seems to be particulary evident in the work of another Korean artist, Nam June Paik. Although the two artist’s videos head in completely different directions (Paik’s chaotic, sometimes frenetic juxtaposition of computer generated images and footage heads in a different direction compared to Kimsooja’s lenghy still shots) they seem to share more than a cultural background. The use that Paik makes of the olympic symbol (over footage of Allen Ginsberg during a mantra) isn’t too distant from the use Kimsooja makes of a jukebox element.

I can’t help stressing the fact that the actual piece was found by chance. You can feel this dimension through the whole exhibition, as in Kimsooja’s videos. ‘A Needle Woman’ is a video installation on display in two different rooms and on eight different screens. The artist acts as the point of a needle, standing immobile in the streets of eight different cities (from New Dehli to Lagos, Cairo to Tokyo, Shanghai, Mexico City, London and New York), while crowds of people pass by, without even knowing that they’re being filmed. Among the different crowds and the different levels of chaos, the artist is shot from her shoulders, in a manner not too dissimilar to the language used by Jean Marie Straub and Danielle Hulliet. Kimsooja never moves her camera, her videos are single static takes, they suggest contemplation and provoke observation within samples of everyday life. A mutable life, shot by chance.