For most of today’s emerging visual artists, drawing is where they got their creative start. You know, a Metallica logo penned on their binder, unicorns, puffy clouds, skulls and crossbones, a precious sketch of a girl or boy they had a crush on in homeroom. 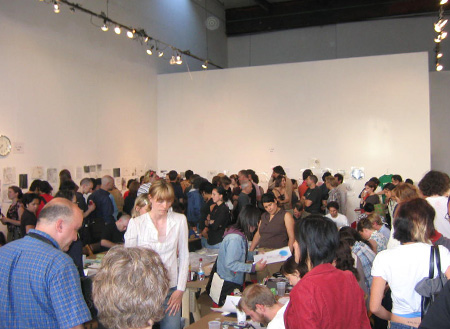 As their minds and skills grew, drawing became an integral step in their creative process, scrawled simply to get an idea down, to try something out or to lay the framework for what would become their completed vision. This was the focus of Southern Exposure’s Monster Drawing Rally, a live drawing and fundraising event, featuring over 100 artists with backgrounds in various media. 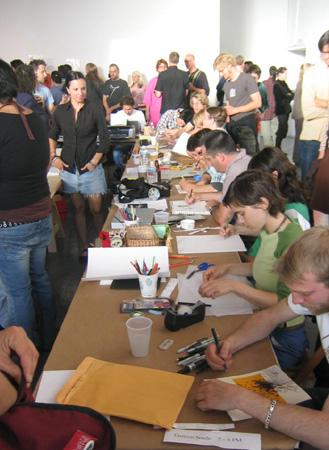 The event was a renaissance of sorts, a return to the old-school for the artists. It was also a chance for people to see a more improvisational and raw side of their work-free of elaborate rendering, self-consciousness and time to think.

Armed with basic drawing materials-pencils, charcoal, pens, markers, and paper-25 artists at a time were shuffled through four, hour-long “shifts” at a giant ring of drawing tables. Hanging ominously above were public school-like clocks that monitored time and created a sense of urgency and energy that filled the gallery space. It was like a drawing endurance race with no universal goal but to make it through the hour. 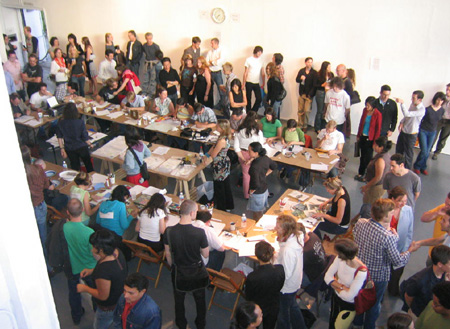 Some artists struggled under the scrutiny of a growing crowd, eagerly looking over their shoulders. Some sketched away as if they were sitting under their favorite tree and others could barely finish drawings as people waited anxiously for them to finish.

As drawings were completed, they were bagged, hung on the wall and made available for purchase at $50 each. It was a great opportunity to nab a piece or five from your favorite artists at an affordable price, all while supporting the gallery and its worth-while public programs. 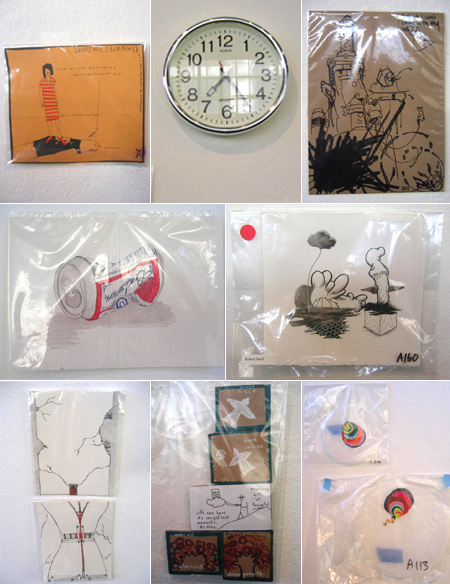