This performance lasted for three hours which is a relatively long for this type of performance. During the performance, usual visitors to the museum came in and came out in the hall and even those people were a part of this performance like a “spice”. The sound of walking, whispering, breaking a glass or dropping an ash tray. Every occurrence at this place, at that moment was merged into this performance called “Blind Date”. 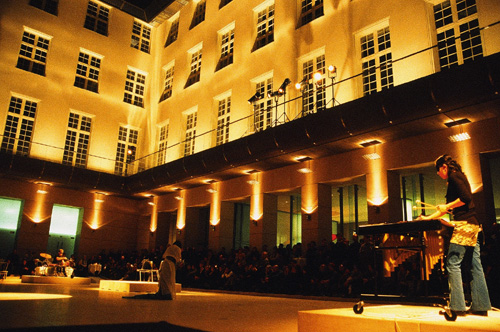 Every audience member who looked at the whole performance or for just ten minutes or people who just walked through might have a different impression from it. Comments from the performers themselves were also various such as “I was confused”, “enjoyed a lot with an open mind”, “confused about the time sense and tactile feeling changed”. The dancer, Junko Wada said she danced like surfing on sound and environment and enjoyed the sound of a glass dropped from a table and broke. It was melted into the sound created by the other performers.

Thus, the quiet and dense three hours was created with the space, impromptu performance, field recording, dance and even audience. Usually, an audience can only see the performance but it was an interesting experience to be able to influence the work. This work is not a kind to “be completed”. It is created by the moment at the place being influenced by the environment. It’s a taste of what he is going to create from now on.