Junko Wada dances in the large space with the fine sound and it seems to me she is on a comfortable trip. Contemporary dance usually looks free without sticking to a “form” at first glance but gradually it looks restricted, however, I felt complete freedom from her dance. It might be caused by the impromptu play but she must also be feeling free from the audience’s eyes with her eyes covered. Moving around without seeing anything seems very dangerous but it is a wonder that we feel easy. It looks more dangerous than musicians playing music without moving around. 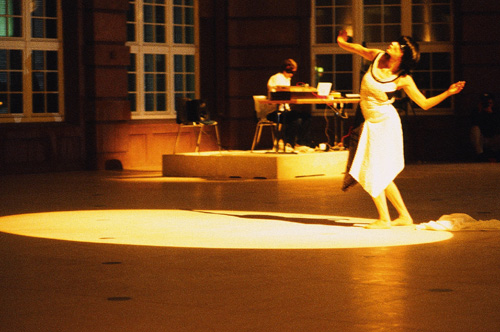 During the performance, Takehito was moving around with a radio-casette rocorder without his eyes covered. I was curious with him and watched carefully, then found that he played and stopped the recorder repeatedly while approaching a performer and moving toward another person. He seemed to repeat recording and playing the sounds. Each performer was standing separately so they had to concentrate on each sound, but his act made them confused; Takehito recorded one performer’s sound and brought it to another performer to play it. It was a very interesting performance.

He sometimes brought the recorder out of the museum, repeating recording and playing with the aim to break the unseen wall between outside and inside and took over the outside environment. Every sound on earth is a component of music for him. It is not such a new idea, but it’s interesting to see that he tried to express it to the audience through his performance.

In his video art works, there is the one using an environmental sound. He uses three screens projecting different pictures on each of them. The picture is of some daily products or foods and the sound is that which is made by rubbing, snapping or scratching. All visual’s bpm is 120. That is, it is synchronizing with the sound. By mixing these three looped pictures, various rhythms are produced. This work is splendid. Corresponding well with his idea, humor and effort. I’m looking forward to seeing this work showcased in Japan.

I got an impression that he concentrates all his energies on sound and visuals adding an impromptu factor on his recent style.