Scherzo expresses the “laughter” in daily life, humorously putting music and narration on an image or an illustration. Recently, the scherzo world came to Soso Cafe. 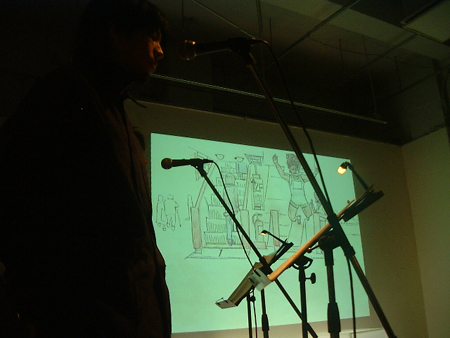 Scherzo organized by Masaki Kagajo has two meanings in Italian, a “joke” and “the unusual music of tempo”. He expresses the name as a thing like a fashion brand. He says the brand “scherzo” carries out “SALE” same as the boutique handling dresses do a bargain. Although their base is Sapporo, the national tour titled the “Spring/Summer collection” was held in Tokyo and at the club “a metro” in Kyoto last February. Their performance was said to express a “laughter which is not of the Kanto or Kansai sensibility.” Following their tour, they performed in Sapporo at the end of August collecting the works announced in the past up to now for the “SALE” collection. The act is getting so popular that the 300 tickets were sold out in a very short time. The “SALE” of this day filled Soso cafe with many anticipatory spectators. 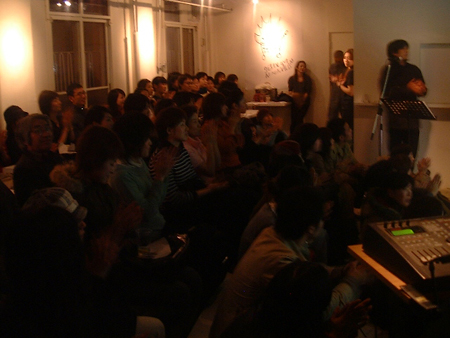 Two microphone stands and a DJ booth were placed so that they would face beside the large screen in front of the spectators. The site made my expectations and imagination swell. As attendees took their seats and when the DJ stopped playing the lighting was dropped and two men in black suits appeard from the back door. These men are called Mekurist and their duty is mainly turning over the page of the script. However, they sometimes heat up the audience with their dancing and singing. After the two Mekurists take their seats, Masaki Kagajo and two narrators stood in front of a microphone. This is the commencement of their performances. 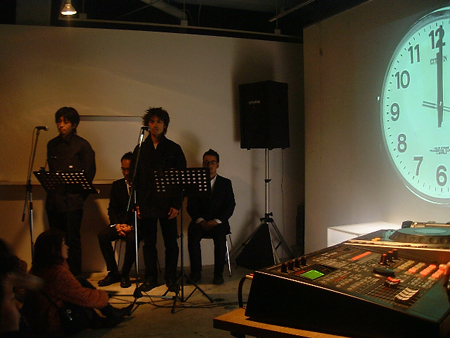 The performance can be described as a modern version paper play, which mainly manages short programs one after another making full use of sounds and visuals. Images or illustrations are projected on the screen, set in the center of the stage, a narrator puts in words according to it and the DJ attaches music and sound effects. Each consists of about 20 short images with an original story. It was like an omnibus short film. Some spectators were laughing at the voices, while others were just floppish and there were even some who were not laughing at all. However, there were few people who expressed opinions that their performance was not interesting according to a questionnaire survey which is conducted at the end of every performance. 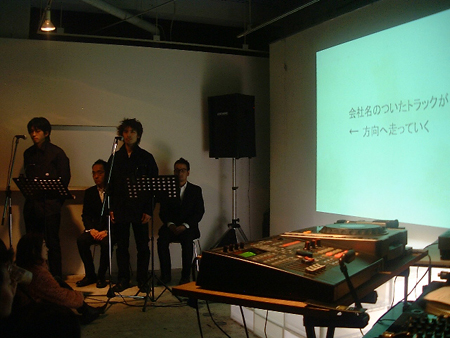 Unlike laughter that makes your stomach hurt,the laughing world of Masaki Kagajo expresses “laughter” that is light. How he arranges things that overflow in daily life through this filter and introducing them is the theme of scherzo that there is humor in the little things of man. > They say that a public performance overseas and through the whole country is aimed for next year. Probably, the day you can meet his brand will not be to far away. I hope you will be able to enjoy their performance if that is the case. You may be unable to laugh, but it is worth of it.