A room in the Center was kitted out to look like their home studio, and was littered with all manner of low-tech noise making equipment. Also featured were a wolf-skin rug, synths and computers, a grand piano, a skeleton, and a few easy chairs. Matmos were turning the idea of the “artist residency” on its ear. Most residencies are designed to make artists feel better about themselves, that they are somehow bridging the gap between the creator (artist) and the consumer (audience). In truth, artists are often as inaccessible during residencies as they are when holed up in the studios creating their “art.” 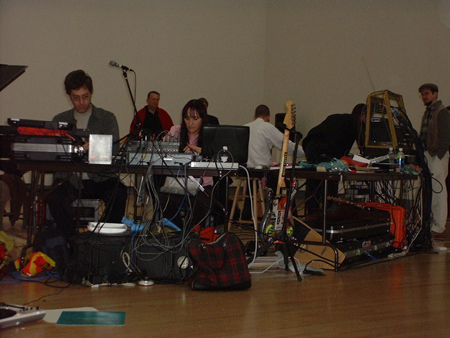 But Martin and Drew were anything but inaccessible. The duo announced that they would be at the Yerba Buena Center for the Arts for a total of 96 hours, from November 7th through November 23rd. From 11AM to 1PM, Drew would interview the first person in their synthetic studio, and use the interview answers to compose a musical portrait with Martin. From 2PM to 5PM Matmos would perform with a number of guests, including Wobbly and People Like Us.

I was fascinated by the idea of these musical portraits. Would they be like Momus‘ portraits, composed to help him out of his financial quagmire? Would they be like the all-strangely-similar caricatures you find at the beach boardwalks that outline the country? I wanted to find out, so I went to the Center around 12:30PM one afternoon and watched a portrait being created. I arrived near the end of the process, however, so I decided to return first thing the next morning and witness a portrait being created in its entirety.

At 11AM I walked into the installation. A friend of Matmos’, Victor Scaggs, was being asked questions for his musical portrait. First, the basics: name, age. These bits of information formed the backbone of the composition, determining the rhythmic tone of the piece. Victor was asked about important events in his life (each portrait being a linear musical representation of the subject’s life from birth until the present). These events were worked into the piece as dramatic bridges between musical passages. A number of other questions were asked, including questions designed to determine Victor’s “humor” according to Renaissance psychology: choleric, sanguine, melancholic, or phlegmatic (pick up a copy of Robert Burton’s “Anatomy of Melancholy”). These questions served to push and pull the structure of the piece in more subtle ways.

With the questions out of the way, Drew began orchestrating the actual sound making, which began with Victor rattling a piece of wood inside the bottom frame of a wooden stool. While it was interesting to see the piece come together, what was more fascinating was watching Drew, Martin, and Victor’ s interactions as time passed and the 1PM deadline became more apparent. At one point Martin’s cell phone rang while he was playing the piano. With no time to rerecord, the cell phone found its way into the portrait. It was also fascinating to see how Matmos used common objects and instruments in uncommon ways: a deer call became the sound of Victor’s sister crying.

Creating the portraits seemed to be a process in between composing tracks for an album and improvised playing. Time was short (Matmos often spend a month or more on a single track), but unlike improvisation a rough structure was defined before any sound was produced. As can be expected from working with such strict time constraints, the quality of the finished pieces varied. Ultimately, the portraits themselves (burned onto shiny CD-Rs for their subjects) didn’t seem as interesting as the actual process behind their creation. Which makes perfect sense, as the installation was about a private process made democratic and public, not about creating polished pieces of music or shiny CD-R objets.