The final night of SWARM was located in the Yaletown area. In addition to the Or Gallery, the Helen Pitt Gallery, Centre A, Onepointsix, and the Belkin Satellite, a field show by Video IN was held in Cathedral Park this year. The exhibition named “The philosophy and science of mutation” at Centre A was the hottest spot of the night. The exhibit presented photographs and a performance video installation by Babak Golkar, who is an Emily Carr Institute of Art and Design grad who won the Helen Pitt award in 2003. 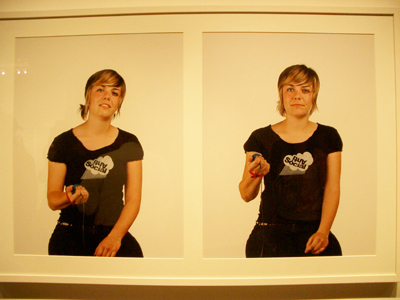 Golkar’s exhibit explored human communications in a scientific and experimental way. In his video, Golkar tells his life story to a listener in a studio. And the listener tells another listener/storyteller the story. It is similar to the Telephone Game that is played among children or is used to test children’s abilities of listening and memorizing. While this performance is repeated, the phrase of Golkar’s story is obviously distorted with indirect conversation. Golkar suggests the outcome is something like a cerebral scientific defect. And what makes this piece humorous is that the storytellers/listeners enjoy telling Golkar’s story without questioning the correctness of the message. Golkar also sees this particular state of mind as a moral defect. Our communication is beyond certain limits of freedom. Golkar may reconfirm the origin, the evolution or the development of human dialog through this piece. The video installation is shown along with two shots of each storyteller/listener. Each person holds a remote shutter release in one hand and photographs himself or herself. In the photographs there are subtexts that test our visual reading. Besides verbal conversations, visual communication is exploratory and represented directly to the audience.

Like the previous four years, SWARM 4 provided more opportunities for the public to share local art scenes in Vancouver. The more the audience comes out and “swarms” around the galleries, the more artist-run culture in Vancouver will be supported. It is important for both artists and the public to get involved (communicate) socially and culturally.