Sao Paulo is one of the greatest graffiti centers in the world. The city has famous artists like Os Gemeos, Herbert, Speto, Nina, John Howard (from old school), Onesto e Vitche, and a new generation of talents: Flip, Koyo, Cisma, Loucos, Eno and Titi. 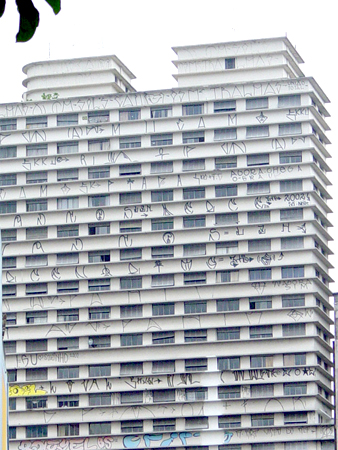 Sao Paulo is also home to an almost exclusive expression of art on the walls. Brazilians call it pichacao’, and this ilegal activity often delights artists from other countries that come to Sao Paulo intenting to know our local grafittis. Pichacoes’ are spontaneous and traditional form of painting fonts most of times unrecognizable on walls and high buildings. It’s often composed by street crews and this tradition has been passed from family members or friends of the same neighbourhood through the years. Pigmeus, SS, 2 Mil Grau, Collos… to name a few. 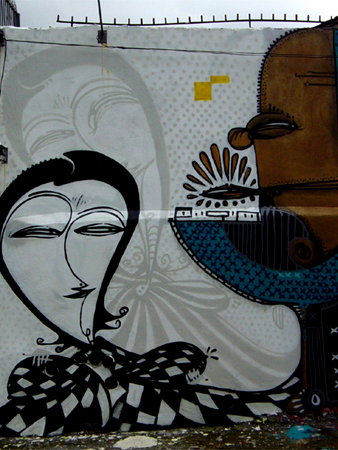 Features that count for a good crew of Pichadores’ :

QUANTITY: the more tags spread through different zones, the better. This feature is called “number of role” (say it “holae”).

DIFFICULTY: the great crews always paint their tags on high walls, so that it can be seen by lots of people. They climb buildings abandoned ones or not and sign their marks on the highest place. Many times one of the crews holds the artist upside down by his legs and then he paints their tag. It’s rare, but some artists have already died doing that. Nowadays it is also a valued action when the artist can’t easily find a place to stand on while painting.

ORIGINALITY: The fonts, the names and the unusual places that they choose are important to remark their status among other crews.