The box appears everywhere in our lives. Cities laid out in grids, architecture of steel and glass boxes popularized by the likes of Mies van der Rohe, commodities made more valuable by commercial packaging into boxes. The list goes on and on. We have indeed been boxed! Hence the saying to think out of the box. 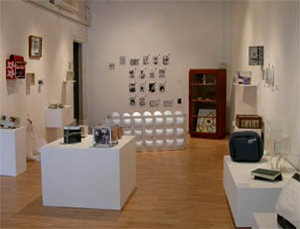 In BOXED ii, we see a group of artists thinking beyond the box, redefining our perception of what a box is and should be. Organized by local arts group Plastique Kinetic Worms, BOXED ii is a sequel to BOXED, which debuted at last year’s ARTSingapore Fair in October. This year’s event features over fifty local and international artists, creating a spectrum of spaces and places.

“Book” by Sia Joo Hiang sees a collection of poems, thoughts and images filling the box. A book holds these together and the box serves as a casing to protect these intangible objects. Covered with fabrics of assorted colours and textures, the personal nature radiates a sense of warmth. 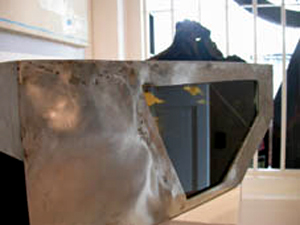 Breaking out of the stereotypical cubic form, Michiya Nakanishi’s “Art nature pool” a metal structure goes beyond a box, fusing and removing cubic forms to create pockets of space that create voids or hold water. Representing the ecosystem and the journey of water, texture and materials reflect the sensitivity as jagged pieces of glass are put together to withstand the pressure of water, remaining silent as the water sits tranquilly.

An unfolded box is still a box, as seen in Thaweesak Srithongdee’s “Bangkok box”. The makeup of a box creates a template for the thoughts it is to withhold. They would remain hidden if they remained as a cubic box. Laid out on the wall, they remain frozen in boxes, boxes of A4, blending into the wall, forming a box of images, a sea of ideas.