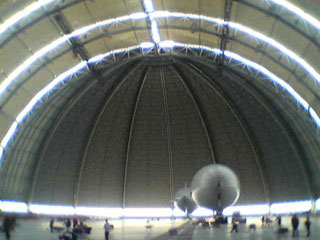 Probably one of the most incredible things I have ever seen, definitely future city ala Tokyo style, was the CargoLifter Ag arena in Breisen-Brand, a 45-minute drive from Berlin. During the bus trip out we were shown a video which primed us for what was to come, an extremely impressive series of juxtapostions of questions, answers and statements about business, money, power and creativity. Unfortunately the whole event and concept was just all too much to explain here. I’ll try.

Picture this; you are standing In a space, which is probably one on the most largest, modern and well designed constructions you have ever seen. This space cost millions and millions and millions of shareholders capital and was sparked off by the simple yet but very complex concept of flying. And this space is incredibly big, is very empty and has never been used and you just cannot believe it. 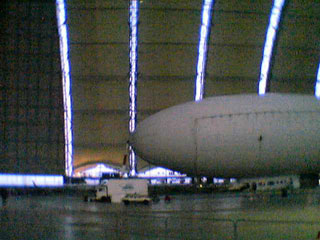 One of the most terrible things I have seen was the poster for it, which after very long examination, I still didn’t understand what the whole event was all about. And that was apparantly the idea behind the poster and the event – misunderstanding, misbelieve, creativity and chaos. But what else do you expect standing in an arena, well actually a really big tent – 350 meters long, 230 meters wide and 110 meters tall. A tent, which was built to build zepplins, which for example could transport turbines from Germany to India. But never did. The bankrupt CargoLifter Ag never built a zepplin let alone never really worked at all. You have the feeling being in a very modern ghost town. 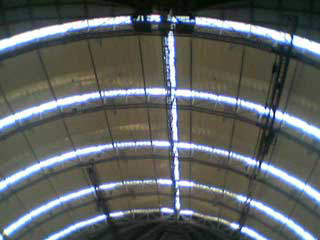 The CargoLifter Ag hall was rented out for two days from the ‘Masse und Macht‘ (mass and power) group and the Sophiensaele for an interpretation for a 5 hour + long Morton Feldman piece. Flute, keyboards, percussion, feedback.
It was performed in such a large area, but very quiet, it was truly incredible. There were beds layed out so that one could lie down, look up, drift off and ask oneself some serious, ‘what is the meaning of life?’ questions. And then slowly, the meditation phase, a very pleasant but slightly evil peacefulness settles in. A peacefulness that maybe somehow resembles a very modern and chemical sort of death. The whole spectacle was truly amazing, paralelling the scale of a Wagner perfomance, extravagant, bombastic, amazing. For more information please visit: www.musikmissbrauch.org 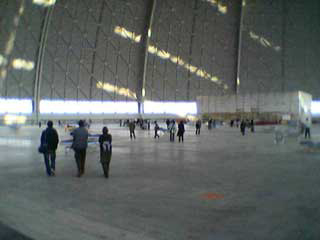 Today, the 23th April, was world book day and to celebrate Germany did something quite cool. The goal was to produce the worlds quickest book. This morning at 7, 40 authors became a breifing to write a two-page short story about speed – velocity. The text was passed on per email for proof reading, was printed and distributed in Germany and was presented at a reading earlier this evening.

By the time you read this the first ever Designmai will be taking place in Berlin. A lot will be going on, hopefully a lot of successes and results for the Berlin graphic, design and architecture scene. Designmai 2003 is 81 exhibitions, 20 parties, 46 openings, 17 events, 13 speeches, 5 workshops, 2 conferences and 2 tradefairs and probably a large amount of pretentiousness, social climbing and general bullshit. We will see.