I have to admit, as someone who lives in New York, that I don’t go to museums that often. Just to name art and design museums, there are a handful of them that I can think of: Guggenheim Museum, Metropolitan Museum of Art, Museum of Modern Art, Cooper Hewitt Design Museum, Whitney Museum of American Art etc. Last time I went to an art museum was several months ago when I had an out-of-town friend.

The last time I went to the Guggenheim Museum was more than 3 years ago to see a show called “The World of Nam Jun Paik.” That was definitely one of the best exhibitions that I can recall. The current exhibition at the same museum, “Matthew Barney: The Cremaster Cycle,” is also one of the best, I can say. 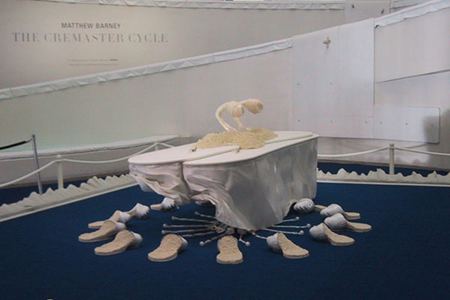 The first significant encounter that I had with Matthew Barney‘s work was several years ago when I saw one of his films “Cremaster 2.” I had heard of him and was somewhat aware of his work through his appearances in several international shows. A friend asked me to go see this film one night and he had briefly told me “Oh, this artist gets millions of dollars to make these arty films.” After watching the film, I have to admit that I didn’t know what to make of it. The narrative seemed very abstract, somewhat slow-moving and not instantly obvious. The imagery, however, was vivid, surrealistic and absolutely stunning. 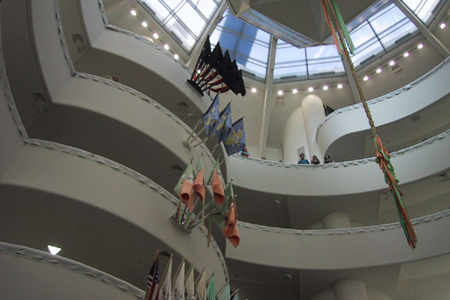 There are five feature-length Cremaster films, made between 1994 and 2003 (although not shot sequentially). The Cremaster Cycle is almost a universe of its own that unfolds cinematically but also through installations, photographs, sculptures, and drawings that Barney makes in conjunction with each episode.