Last year I was invited to join a conference called OFFF in Barcelona. It was an amazing time and I met lots of people. During a break from one of the events, I was hanging on the beach with the One9ine guys, Andrew and Murray from Design is Kinky (DIK) and the always almighty 123Klan.

We were talking about what a good time we were having and how fun this was. It is then that Andrew and Murray decided to organize a big event. They said: if we ever do it you guys are all invited. I immediately asked where do they imagine this event to be taken? They said SIDNEY of course. I said wooooooooooow! So after one year I finally was flying to Australia, with my girlfriend. I almost could not believe it. I had been waiting for a year seeing from the distance how this event was growing. After 33 hours of planes, SARS mask, windstorms etc, I was finally in Sydney! 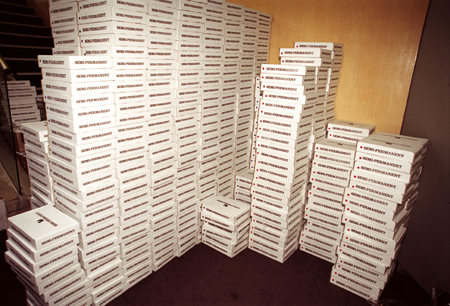 I was not even jetlagged cause the trip had completely disoriented my senses of perception. But as I reached the bed I collapsed. The morning after I received a welcome call for Murray that arrived to pick me up together with Scien to take us to the exhibition place. For the Semi-Permanent the DIK guys organized two main events. 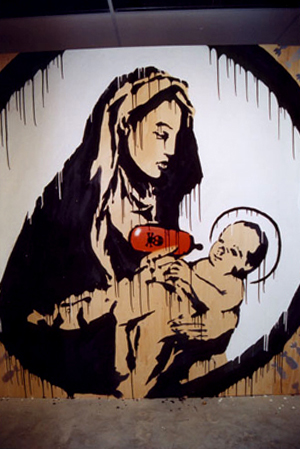 One was the conference held in the Sidney Convention Centre, in the beautiful darling harbor the other was the Street Art Exhibition with works from Shephard Fairey, Banksy, Perks&Mini, Scien&Klor, Dmote and the Burncrew. The space for the exhibition was outside of town in a huge space on a second floor of a building. As I entered I saw that there was already people working on the walls. Bansky was cutting stencils, Shephard was ripping his posters and 123Klan was jamming on the wall. Looking this people working LIVE is one of the most inspiring things I have ever done. See how they create their pieces, starting from a line, a poster, a stencil, each one with his own technique. Beautiful. After being amazed all day and after folding over 2000 boxes the day was over.