On February 15th, the Hamburg based music and booking agency MFOC (Music For Our Children) held a showcase at the Waagenbau, a location right in the Schanzenviertel in Hamburg. Being known in and around Hamburg for their excellent taste in IDM and electronic music the lineup that the guys from MFOC presented that night was very promising. MFOC has been around in Hamburg for quite some time. Usually they host a regular Sunday night at the Golden Pudel club and presented artists such as Funkstoerung, Jimi Tenor and Chessie in the past, just to name a few. 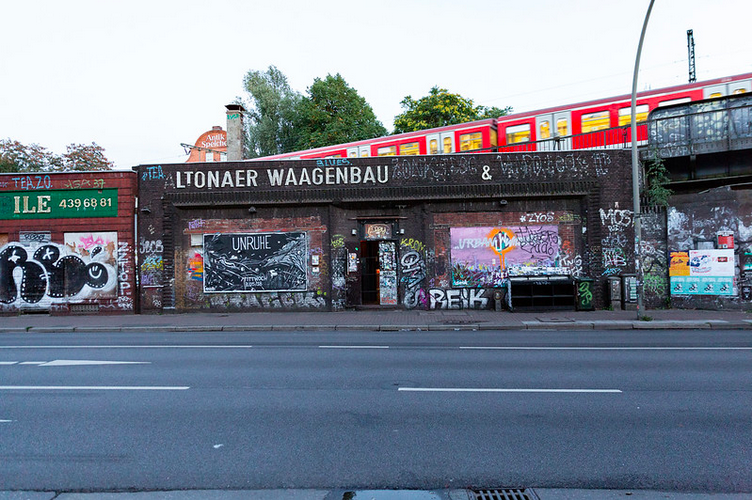 The choice of holding that night at the Waagenbau was a good one. Having quite a good club scene here in Hamburg but not that much movement in terms of new clubs opening up or changing their location, the Waagenbau just opened its doors a couple of weeks ago and is an enrichment to the northern German club scene. The name of the location, Waagenbau, comes from the former use of the building that used to be a store in that one could buy weighing machines. When the store went out of business about a year ago, the location seemed perfect for opening up a new club. Being located right under the tracks of the trains the music and parties can not bother near by residents, which usually is a great problem in Hamburg.

Having just opened up some time ago, the furnishing of the club is still very spartanic which does not keep people from throwing some of the best parties that Hamburg had had in the recent time. The club is divided into two rooms of which one is rather a bar area in which you can chill out, talk to people you meet etc.. The other room is slightly larger and is reserved for concerts that take place there on a regular basis. The concept of the Waagenbau is to represent a broad variaty of musical styles and be open to all kinds of music.

On Tuesdays, for example, there is a weekly ragga/hiphop night which probably will be hosted by Eimsbush, which is a quite famous label for more local hiphop artists in Hamburg. Where there is a funk and soul night on Fridays, the weekends are kept mostly to electronica ranging from drum and bass to IDM and all other kinds of electronic music organized by different hosts most of the time. Which brings us to this night on that the lineup of the djs and people playing resembled this the best.

Opening this night was Nitrada, an electronic act out of Hamburg which gave us IDM at its best in the tradition of a lot of “Warp-ish” acts such as Plaid, Autechre and Aphex Twin. After playing a set for about an hour, the second act KissKissBangBang came on stage who are more than famous for their live appearances and dedication to their music, their sound and also their audience. Another very interesting act that gave their performance that night was Mediengruppe Telekommander who are rather into more experimental electronica but which also rocked the house.

Last but not least there was Kandisquer, a hotshot new local act which gave a stunning performance that was appreciated greatly by the about 300 guests attending the night. All acts were accompanied by records spun by local and MFOC own djs, so that the party can only be described as a full success.