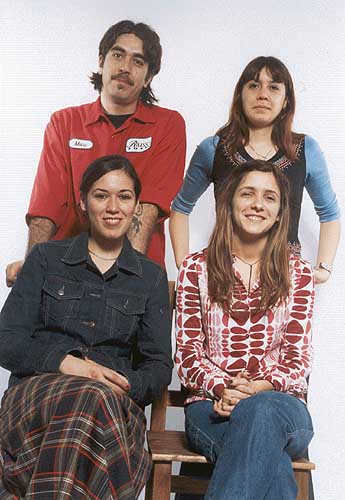 Four young designers were the winners of “New Talent Contest”, which was organized during last fashion week in Buenos Aires. In September 2002, they showed their first collections and today, three months after the event, they tell us their experience, their projects and the repercussions of their entrance in the local scene. 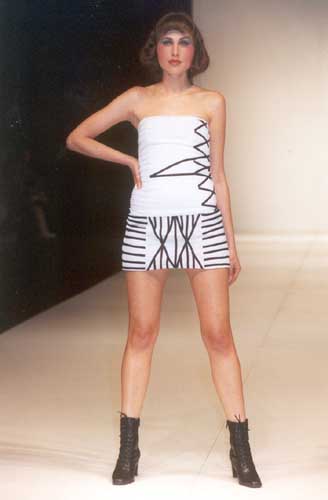 Even though the local situation had its ups and downs during last year, the young designers generation let its creative spirit flow with terrific results. The limitation of economic resources forced them to squeeze their internal strength. So, those who began to walk the path of clothes design are already drawn as real artists, creatures whose common goal is to make things more beautiful, through wit and willing dedication.

Almost everyone starts the same way: they provide themselves of things they can’t get anywhere. “It all began as a need”, Helga Diaz tells. “When I went shopping I could never find anything”. Her taste for design is almost an obsession. She searches for the refined detail, the perfect ending, and the moving ornament. “I start rummaging what nobody likes”, she tells proudly. Having been Mariano Toledo’s assistant -one of the most known designers in town- for more than a year, “I learned the exquisiteness of the finished tailored garment”, Helga admits. “My stuff is very craft worked, I end each detail with my own hands”.

The collection she introduced at BAFweek is a live proof of that. “I took inspiration from XIX century woman, the idea is to merge the dominant figure of that time -based in the corset- with new materials and fabrics that allow more flexibility”. For that, the choice of lace and embroidering in skin and pale rose colors. “The intention is to reunite the image of the vision of nude, pure feminine body”, Helga comments. She’s the only winner of the contest who already has her own brand, next to Laura Fern㌻dez, previous winner of the same contest.

The brand’s name is NandezKlan and it can be found at Salsipuedes, a very crowded shop in Palermo Viejo, the fashion neighborhood in Buenos Aires. The idea resumes the original idea the girls pursue in each one of their enterprises: it’s the drawing of a woman with the brand’s tattoo in her arm. Modern and antique cohabit peacefully everywhere. Meanwhile, a unique thought keeps on beating like an obsession. “This passion thrills us. We don’t sleep, and if we do, we dream about what we are designing. It is in our minds the whole day”, Helga resumes, showing a piece of her continuous responsibility of creating. And she keeps on creating. 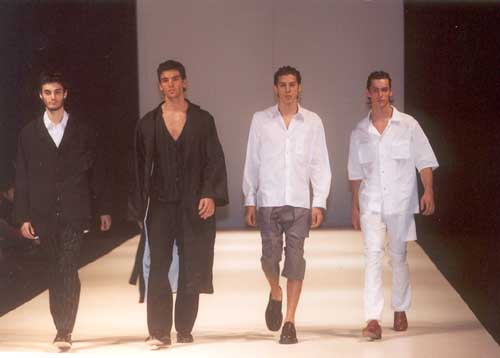 Oscar Cantero: between fashion and music

“I’m a workaholic”, Oscar Cantero confesses. “I’m always thinking about designing”. Oscar is the first male to have won the contest. His collection describes an analogy between two music styles: hip hop and tango. He chooses to express it through their most representative characters: “the African American gangster from the classic seventies movie, or jazz musicians from the forties and fifties and the petitero in tango, the cool guapo who wouldn’t take a knife and who dresses fancy. Oscar tells he “discovered the origins of hip hop are very alike to those of tango, they come up in lower class. As they both are wide cultural movements, the equivalent graffiti in hip-hop is filete in tango, and they both have their language; in hip-hop is slang. In tango, the lunfardo”.

He prints his own mark in his designs; he changes tailoring mixing it with baggy style and big clothes typical or black musicians. “But I didn’t want to take it to all my garments, so I just made the pockets bigger”, he says.

As for BAFweek, Oscar thinks “this fashion shows are the most interesting of Buenos Aires, because each of them is particular and has a choreography and stage design, of its own. If, for example, you want to throw grass along the runway, it’s ok”.

Oscar sells his clothes in self-held clothes fairs, the new boom of local fashion. From the contest and presentation of his collection to society, he’s been offered to work as the costume designer of “Mambruﾓ, Popstars Argentinean group born in a TV casting.

Even though the bet is risky, Oscar takes it as a defy and he admits that “if everyone chooses white, I choose white, for a change”. As a little child, he was interested in alternative cultures and it appears not only in his designs but also in his attitude towards work.

Inside this reality, they need to recreate and transform the environment. “Argentinean design has a little bit of everything. As it is a problematic place to live, we have to sharpen our wit to make the most of our resources”. Doubtlessly, he gives the example. Even before summer, he had his winter collection already designed, with its turn of twist incorporated, of course. 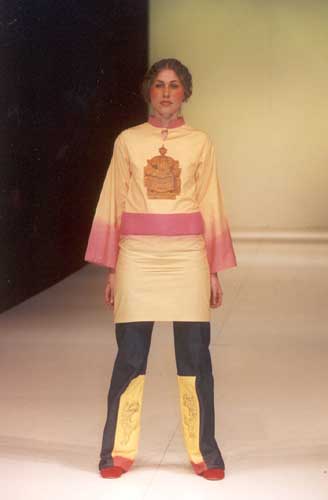 The new talents do their best to turn the twist of everything. Maybe that’s the reason why they were chosen. Gabriela Varela experiments. She paints, draws, works the clothes, textures the fabrics, dyes them in her bath tub, with the help from all her family; she also searches and invents.

At the time, she’s working in a garments store and waits for the moment to come home each day and take the remaining defective clothes, the ones the owner discards. She starts looking for a better ending and she actually finds it.

Her collection was inspired in Jodou, a Chinese love story “in the fifties, in a dry cleaning. The scenes I liked best were the ones of hanging clothes, Gabriela tells. “When I began doing research on Chinese culture, I discovered the simplicity of the garments, they are enveloping and tied up, there are no fasteners or buttons. I was very close to them because I don’t like over elaborated clothes. I prefer simple”.

Gabriela still doesn’t believe her collection was introduced to the public. “BAF was a slap of reality. It boosted my ego and therefore I decided to start my career”, she says. Nevertheless, talent has to split hairs. For that, the young designer wants to “gain experience in the real world”. Making wearable art, showing and selling, getting inspired to the people, opening new doors so that clothes reach people. That’s the way to make the chain work. 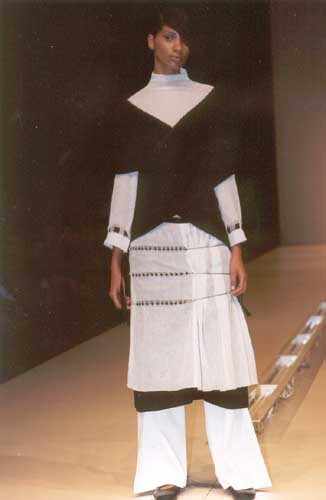 “I felt my effort rewarded through the applause of people. Closing BAFweek was a surprise and the repercussion was great,” Marina Casas tells. She was the chosen one to close the last edition of the show. Marina is tireless and enthusiastic. She comments on her experience with composure and joy, moving her hands to the rhythm of her words.

She bonds with her collections and investigates each little detail. “When I introduced the reinterpretation of Yamamoto, I went to Japanese parties, bought Japanese books, and ate Japanese food. I went mimetic with their culture”, Marina admits.

For her collection, she did research on religion and its typologies, characterizing woman oppression. “I wanted to show human contrast, like playing with hidden planes. We are all human, after all, black and white, like good and bad, are everywhere”.

Just like all of them, she’s aware of the environment as well as her own internal answers. Each designer has to look with all of his senses, until inspiration finds him. That is, obviously, the moment of glory. As Laura Fernandez says, “each designer is moved by a different thing. We can make a whole collection with anything. Inspiration can be a butterfly, in the sky”.