On November 30th has taken place the 6th Edition of Buen Dia Festival in Buenos Aires, Argentina. As always, the event was a manifestation of good taste, electronic music, enthusiastic people, fashion design, food and toys. Everything in an open and splendid park. Amadeo Pasa is the creator and director of the festival. He’s kind and hyper kinetic, and talks about his project with pride and modesty. And he also disentangles the hidden side of the iceberg. 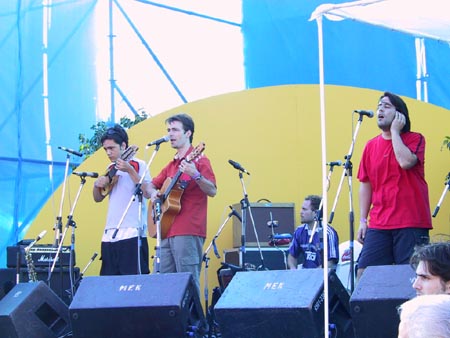 Amadeo Pasa looks small. He’s 24 years old and portrays the aspect of a teenager. When I see him, I wonder how he does everything he does. In the neighborhood, he’s consented and now he’s known in the whole country and outside. His goals fly high, much higher than anyone could imagine. When he talks about his ideals, he gets bigger; he barely fits into his body. And all this has just begun.

We meet in a quiet deserted bar in Old Palermo, his ambience. Every five minutes someone says hi, waves at him, asks him how he’s doing. Of course, he moves like a fish in the sea. He’s extremely meticulous when choosing his food and I fear he would leave the place because of the waitress’s lack of experience. Finally, he makes a choice that pleases him. “If he keeps that organization’s ability when he’s taking some time off, he must really be a thoughtful worker”, I think. He’s already begun to talk about that he knows best. He’s the puppet master of his destiny and also a party boy.