FRAC is an organisation of the Agency for Cultural Affairs, which encourages contemporary art, and branches of FRAC are located all over France. It was established in 1982 with the aim of collecting artworks which reflects the time, and displaying those collections in order to widely permeate the contemporary art through the public. The other aims are to gather art throughout many places as well as supporting artists’ creative activities. “Le Plateau” is a new FRAC in the Ile De France region. It opened this March in Paris.
It is at the 19th arrondissement in the northeast part of Paris. China town at Belleville and Butte Chaumont Park, which was made in the 19th century, are in this area. Le Plateus can be found in the middle of a residential area that is not too far from Butte Chaumont Park.

Le Plateau is on the ground floor with glazed walls of a modern building on a corner. I found the logo of Laurent Fetis on these glazed walls and this logo casts a spell on this usual building as if something special thing is hiding there. 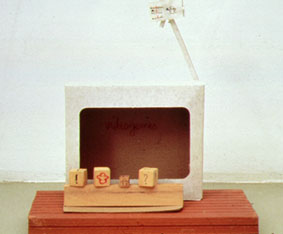 Many works of Robert Filliou, Till Roeskens and Francisco Ruiz de Infante are showcased in the exhibition “Premiers movuvements – Fragiles correspondances” that is held there at the moment. To be honest, I could not feel any fresh surprise from this exhibition. Unfortunately, I found the taste of the works a bit old.

However, I can expect to see an on-going art at the next exhibition “Objects de reflexion.” It will be held from the 13th of June.