The first and the second movie dealt with social problems but this third filmﾕs subjects are more personal issues. Every character seems to suffer from loneliness.

It’s because Mr. Takayama ultimately wanted to write about personal life. We could not step into that level at the begining. Mr. Takayama reminded us that all characters are human with imperfections. Hisazumi got injured and is divorced. All three main characters are not good people at all. Hata is a good guy but too soft as a policeman. Then Hisazumi is not a perfect model policeman. Goto has a good personality but we didn’t make him perfect this time. So you may not get empathy but this film is full of humanity.

To tell about loneliness, People in Tokyo are said that they are not good at communicating. I myself am not good at it. You know I’m a comic artist.

Instead putting many dialogs, you dipicted details of Tokyo city.

Mr. Takayama emphasized that story is important but the film also has to show the present Tokyo which is very unique. He wanted to express people’s stress and weariness after the Kobe earthquake or the Ohmu incident had happened and Japanese economic climate is going down. Depicting a morning scene with crows picking trash, a midnight convenience store, trains on the rush hour, drunken men on the last train… I think that is what Mr. Takayama aimed to do because these are the things people see in everyday life. And this experiment is quite successful. It can not be expressed much on script. 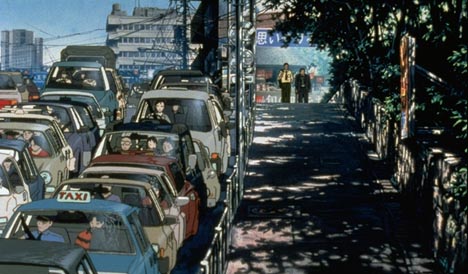 Could you give some message for our readers?

I bet, without my explanations, many Patlabor fans will understand this film is based upon the original Patlabor outlook. I recommend this film with confidence and hope to enjoy it.