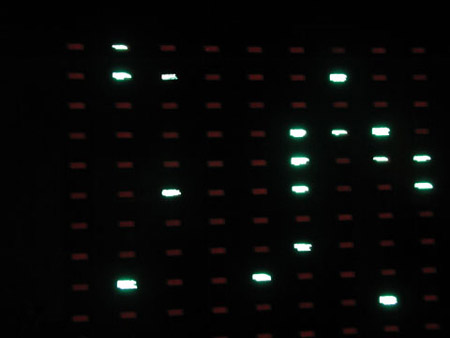 The mounting of the installation, Listening Post, marks both the celebration of a fresh collaboration between Mark Hansen and Ben Rubin but also the mourning of Brooklyn Academy of Music’s Artists in Multimedia program which announced the need to pull back from its commitment to new media in favor of stage performances. Nevertheless, Hansen and Rubin intend to continue their collaboration in addition to pursuing their individual commitments to Lucent Technologies’ Bell Labs research center and EAR Studio respectively.

Hansen and Rubin paired as a result of a workshop between Lucent and BAM where engineers and artists could discuss possible partnerships. Their project was one of the three to receive funding to continue research. At first the two seemed like an unlikely pair with Hansen a statistician and Rubin, an artist accustomed to collaborations with the likes of Steve Reich, Laurie Anderson, Ann Hamilton, and Diller & Scofidio. It wasn’t until Hansen presented an unpublished paper on turning data into sound written by Max Mathews, a hero of Rubin’s, and John Chambers, one of Hansen’s mentors, that the two found a problem to undertake.

Their initial investigations began with an analysis of the traffic that occurred over the Lucent web site. By assigning various tones, timbres, and rhythms to specific online events, the two were able to create an aural representation of the character of surfing that occurred for instance during the early morning and mid afternoon. Armed with observations from their first experiment, they evolved their working methodology increasing the scope of work via an analysis of chat rooms. They began the new endeavor by creating a proprietary piece of software for collecting data and translating it into music. With the audio components coming into place, they realized the need to add a visual element to provide a totally immersive experience.

The final manifestation of the project brings us to the present installation. Using a grid of 110 cash registers screens, texts from live chats flicker, sprawl, and sometimes come to rest while both background music and whispering voices accompany the effect. Mr. Rubin said, “There are an untold number of souls out there just dying to connect, and we want to convey that yearning. I hope people come away from this feeling the scale and immensity of human communication” on the Internet.

Hansen and Rubin have also discussed the possible practical applications of their work. One possible scenario might be for webmasters who need to monitor content. By providing various visual and aural cues, problems needing immediate attention could be easily recognized.

Keep your eyes and ears open for their continued research, which they call “Ear to the Ground”.