In 1785, the British philosopher Jeremy Bentham (1748-1832), began working on a plan for a model prison called the panopticon. The signature feature of this design was that every one of the individual jail cells could be seen from a central observation tower which, however, remained visually inscrutable to the prisoners. Since they could thus never know for sure whether they were being watched, but had to assume that they were, the fact of actual observation was replaced by the possibility of being watched. Bentham assumed that this would lead the delinquents to refrain from misbehaving, since in order to avoid punishment, they would effectively internalize the disciplinary gaze. This model was long to be the subject of theoretical and political debate. In the meanwhile, the controlled space of the panopticon has become synonymous with the cultures and practices of surveillance that have so profoundly marked the modern world. When we hesitate to race through a red light at an intersection where we see a black box, not knowing whether it contains a working camera or not, we are acting today according to the very same logic. 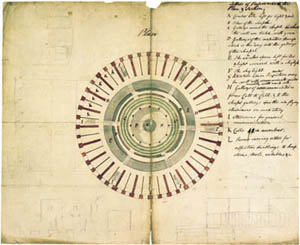 On the Internet, the recent discussion on surveillance after facts about Echelon and other such systems have been published show that the general public has become well aware of the subject.

In Germany last month a much noticed exhibition has opened its doors. Karlsruhe’s ZKM (Center for Art and Media), is staging ” Ctrl Space“, the first large scale event on the rhetorics of surveillance, including 59 artists in one huge show. Wandering through ZKM’s atriums, one discovers various ways the artists approach the topic of surveillance.

iSee by the Institute for Applied Autonomy is a web-based application that helps individuals avoid closed-circuit television (CCTV) surveillance cameras in public space. Visitors to the iSee website are presented a map of New York City, with the locations of all known CCTV cameras as documented by the NYC Surveillance Camera Project. By clicking on this map, a user indicates points of origin and destination. Route-planning software developed by the Institute if Applied Autonomy then displays a “path of least surveillance” between the two points. By following this path, individuals may safely navigate around the city without fear of unwanted monitoring. The IAA describes their objects as a means to counterbalance private interests that cynically exploit public fears to undermine civil liberties in the name of social control and corporate profits. They see a growing need for dissidents to raise public awareness and to directly undermine the capabilities of these interests.

A highly original concept pointing in the same direction was developed by the New York Surveillance Camera Players, performing plays like Alfred Jarry’s Ubu Roi or an adaption of George Orwell’s 1984 in front of surveillance cameras on the streets of New York. In a general way, the SCP are inspired by the Situationist International, a group of artists with a cultural revolutionary background active in Europe and America between 1957 and 1971. Like the Situationists, the SCP are interested in public disturbance and scandals, and the positive things one can accomplish by causing them. 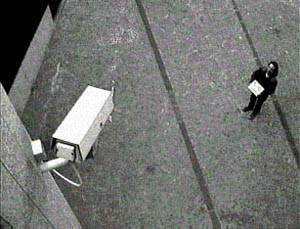 In the event of Amnesia the city will recall… part I, Sydney Australia Performance, 1996-1997, Denis Beaubois, Photo: David Rogers

Equally disturbing, but on a different level, are the works of Denis Beaubois. He was trained in Butoh performance techniques and is thus able to stand virtually motionless for hours on end, holding up signs to the cameras that stated sentences like “May I get the tape afterwards?” or “Caution, reading this sign you may be photographed!” Often, this stoic performance would trigger some sort of response, having him taken away by the police on reasons symptomatic for bureaucratic banality. Yet like this the performances posed a series of questions which explored the dynamic between what Beaubois calls the “primary” and the “secondary” audience. In the context of the performances, this primary audience was, as Beaubois put it, “the surveillance camera.” In provoking the system to focus its attention on oneself, however, the apparatus could also be said to become part of the performance. It is this confusion resulting from the exchanges between watching object and watched subject or vice versa that make his work so highly interesting.

SWR Radio and Television station cooperated with ZKM to donate the International Media Art Award. The first price, handed out in course of the exhibition, went to the Bureau of Inverse Technology that build a little spy plane to investigate into the most secret realms of California’s Silicon Valley. It is a pet aerial observation unit, developed by bureau engineers from the generous residues of coldwar precision. The device consists of a radio-controlled model aircraft, instrumented with an onboard miniature b&w video camera and transmitter, which sends continuous in-flight digital video to a ground video receiver. The video signal, in combination with a joy stick controller, provides the navigational system for the plane. Results were as mindnumbingly monotonous as mysterious, bringing to light the utter normality of the world’s most secretive and sophisticated computer manufacturers.