Getting off the MRT (Singapore’s version to the French Metro) at the Singapore EXPO is like entering a space ship. Singapore’s latest extension to the ever-growing network of the MRT (construction for the new Northeast line, which includes a station at Changi Airport, has already begun) greets passengers with sleek lines and radical forms. 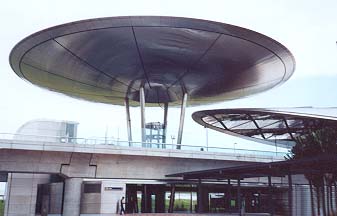 While approaching the station, passengers would be awed by the unique form of the EXPO MRT station. At the head of the station designed by Foster & Partners, sits a 38-metre diameter stainless-steel disc, while a spectacular 200-metre long titanium-clad dome covers the station. Lined with numerous triangular shaped mirrored stainless-steel panels within, an incredible collage is created. Reflecting passengers, light, plants, granite floors and the fleeing train, an intriguing visual and audio display is created both during the day and in the night. 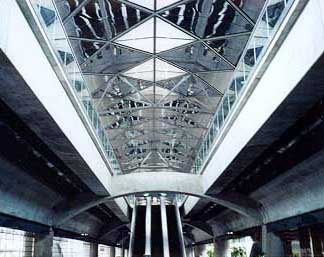 The disc, being the focal point of the station, sees the strategic positioning of exits, phone booths and ticketing machines below it. Thus creating a center of activity, both in terms of physical appearance and user circulation. To further draw attention to the disc, an elevator made completely out of glass and metal sits directly below in the centre, bringing a brand new sense to the words beam me up! 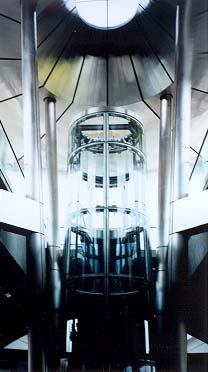 As passengers make their way down to level one, horizontal metal grills on the outer side create a complete contrast to the dome and reflections above, forming a contrast between the straight lines and curved forms. Creating an illusion of a platform for the form above to rest upon. 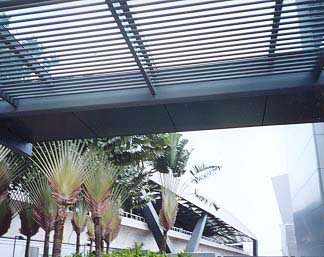 As a Garden city, greenery is not left out from this piece of architecture. The inner portion of the ground floor sits a tropical garden while shrubs and palms are strategically placed on the boundaries of the station. Not only pleasing to the eyes, but they also act as filters reducing heat and glare. Being open aired, and located in the tropics, certain aspects of tropical architecture were considered. Instead of walls, the adoption of grills allows maximum air circulation while still creating a barrier. The titanium-clad dome also reflects the sun’s rays away, reducing the temperature within by three to four degrees. The dome also envelops the sides of the train platform, creating extra shade thus keeping more heat out. Thus creating an atmospherically comfortable environment for passengers. 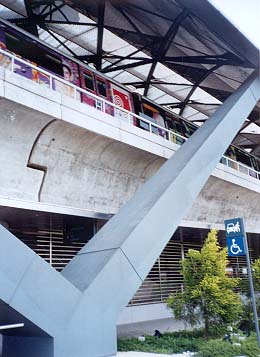 The station is a gateway for the Singapore EXPO, which is a convention centre catering to numerous exhibitions (including those featuring the latest technology), forums and even concerts. The convention centre itself is sleek and mammoth in size, containing elements of futuristic ideals. The EXPO station, like a space ship, brings visitors to the convention centre. To catch a glimpse of the future.

A stop to the future is now only a train ride away.