Something remarkable is happening at the 2nd floor of one Hollywood aparment. Well, it has been happening for a while now, to be precise. Founded in 1999 by Jon Buck and Mark “Frosty” McNeil, here, Internet radio Dublab lays its home. “Jon had this plan to do an Internet radio station and we came together to meet. I know the music, I know how to actually put together the radio station, and the people who can get involved to do technical things. He could provide business ideas, also the capital and motivation. He really wanted to put it together. So we decided to do it together and from then on, things started happening.” says Frosty. Steps are serene, yet at the same time so radical you almost want to call it a ‘movement’. They’ve been pushing the envelopes of people’s common understanding of what Internet radio is and could be. Per Dublab spokesman Frosty, they can serve you good, and even better than you’d ever imagined. 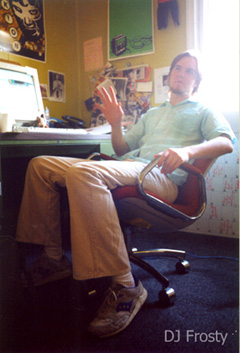 Claiming 70% of their popularity to word of mouth, quite a bit of their quality time has been spent to select the right name for this collective. “…it was almost impossible to find 6 letters and under name,” says Frosty. “Obviously it had to be a made-up word, that everyone can spell, but unique enough that the word of mouth will be in effect.” ‘Lab’ apparently was a keyword to show their attitude that are constantly experimenting and on the works for the better and higher.

Rooting its origin in used-to-exist USC (University of Southern California) radio station KSCR, Frosty and his fellow music lover took the initiative to air electronica tunes in the hip-hop dominated world. That was back in 1994, when their 3 hours / week slot was pretty much the only electronica program you could find in greater Los Angeles area. “KCRW might have been airing couple things but that was about it. Probably we were the first ones to put drum’n’bass on radio,” recalls Frosty, and soon they found their program growing into a 36 hours / week Goliath. Goliath. But the potential of home ground was unfortunately limited. Signal already being as small as it was, only serving L.A. Downtown vicinities, station collapsed after authority’s unfortunate decision. After all it worked out well though, they then went onto searching its home in the world wide web. Signal size was no longer their obstacle there, instant access to wider audience anywhere in the world where the network reaches. “E-mail responds have been really amazing,” and it sure is a confirmation of the word being heard. And they are working really hard to meet the responds all the way from beginning. “Developing the site, we put in a lot of work in that, and then it kind of came to the point where we were doing so much of that and was absorbing so much time. I quit my job and Jon quit his job, and everybody quit their jobs. And we got this spot in August ’99.”

Now counting the masterminds to 4, with Rob in charge of visual presentation including Dublab logo and soon to come upgraded faceplates of the site, and tech force James who was called in to join the team from Maine, which Frosty quotes ‘listener feedback and involvement’. James’ e-mail, happen to be written in right time with right skills, literary brought him to this Southland where he would not have considered to live otherwise. “Once I met the people, everyone was just so involved. This could be Mars, this could be Los Angeles, it could be where I’m from, it could be Africa, I don’t care. There’s a lot of great people involved. And that was the reason that I decided to get involved too.” says James. Frosty, once being a stranger to this city himself, adds a southern charm “and we tanked him up with margaritas.” 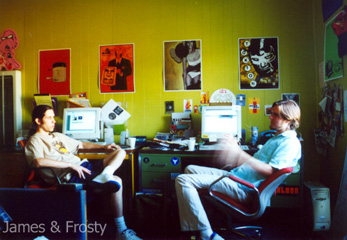 Los Angeles is and was at one point a strange land to many people. Diverse elements that everyone brings in to the city creates little outlet here and there. “You find these little pockets of cool that are so interesting, that once you start to get the grasp of those elements, you can kind of get a bigger picture of the city. I think that’s our real strength. We are able to do something and show something about L.A. that most people don’t know. Even people who live in L.A. don’t know certain music scene going on. I think that’s one of the most powerful things that hopefully we’ll be doing, and have been.” states Frosty of their standpoint. “We’re in 2 year game plan,” adds as spokesman, “we’ll just stick around and simply keep doing this. Because guaranteed the moment economy hits (we all know it’ll come back,) if we’re here, we’re in a good position. By then the audience will be developed and offerings will be progressed thus far. Once wireless network earns its status in States, like some other cities in Europe and in Asia, that’s when things will be awesome. We certainly don’t advocate people to spend most of their life in front of computer screen (while people already do, ) you know. While walking down the street, hanging out with friends at the beach, sitting in the park, and when driving a car, if Dublab can be brought into the different parts of your life…when we get to the point to have Dublab in people’s pockets, that’s when things will be really awesome. Music is such a social thing.” Afterall, but with clear vision, Dublab remained independent as to this day.