Placard is an electric music festival organized by Buro. This is an experiment with 12 headphones at an apartment in 20 district. Buro have organized electric music events from 1998. The four members includes a graphic designer and musicians. One of the members lives in Vienna.

The placard started four years ago was based on idea of making bar in an attic (rooms for maids in old times). (This would be a sort of peep show of works!) “This is a bar with a barman serve music to a few people doing his own ‘work’. Attendees/Artists are able to test the works. Any personal rhythms would do such as completed works, collage, and even something like a sketch.” Eric from Buro says.

This bar in the first Placard was in a garret which was in the basic idea. However, according to him, it was impossible to continue that style. 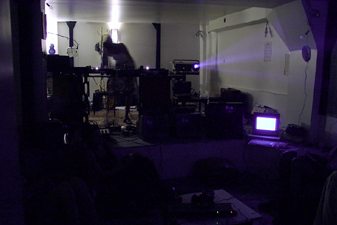 ‘We achieved to stream all through MP3 in Placard 2. Then we started to think it might be possible to coincide in some cities.’ This Placard 4 reached to connect two places via network and hold this event at the same time, which had never done before.

Why was it in Paris and Vienna?

“One of the Buro’s member is one from Mego, label in Vienna. Besides, the Placard 2 held as a part of a Viennese festival, Phonotaktik ’99 deepened the relationship. At that time, the idea to synchronize the two place occurred to us. Last year, we could receive from Lisbon and Brussels. However this is the first time to synchronize. We are planning to include Tokyo next year.”

I asked the music scene in Paris last of all.

“We think it is getting interesting more and more. It is not only in Paris but also in Province (other local cities). This year, we have the most CDs from many small labels ever. Then, the fact that these people are related each other is completely new trend as well.”