Granatta New Media Design is on his way. They don’t follow any particular tendency. Their works are neat and have a very interesting navigation and usability ideas. The interest for the innovation is clear on all the timeline of the studio, and they are still growing. 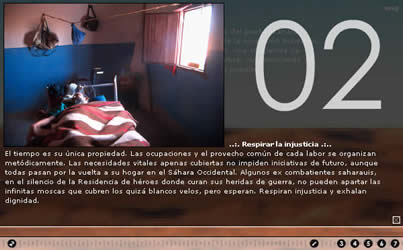 How do you see the national situation of indie design?

We are not much in the know of the "scene", seen as such neither we take it into our head to follow fashions, rules or specific styles beyond what comes to our mind in that particular moment. We know many names, but we don’t mind its search, we prefer that magazines such as Aticco do the dirty work to inform us 😉
However, I hardly believe that it is not going too far to say that in Spain there are more good ideas than technical ones and work’s philosophies which enable later to carry out them as a reality.

And how about the international panorama?

Huge, vast, semi-unknown… who knows what guy is in who knows which place doing what wonder that we still don’t know but that it will see the light in three weeks’ time and that will leave us with the wide-open mouth.
But, certainly, there is a star-system notorius enough, and those who constitute it are authentic rock-stars, which in particular moments I cannot say it is better or worse… anyway I think those persons go a step forward against the rest and I think that if we imitate what they do, we will not go too far. This is some which in Spain, unfortunately, occurs with high frequency. 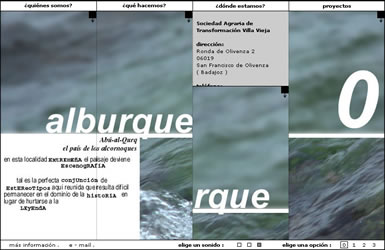 Much, all have positive points from which extract knowledge (we learn from the good stuff) or inexplicable behaviors (we learn from the bad stuff) although more than admiration, is "respect" the word which we more frequently use.

By personal friendship, I will say that Fernandez Coca , Joan Jimenez , Luis Escorial or Joan Duprez , although I have nothing clear really if they are considerated themselves as "designers".

Right now, the most immediate one is Houyhnhnms, a project made along wth Joan Jimenez, Granatta, EquipoA – they’re an audiovisualcollective of Barcelona who made an exposition of thir project in Barcelona.
Walking in OFFF 2001- in which we have got the privilege and luck to rely upon the OFFF organization which Houyhnhnms have included as part of the program of the festival second edition which will be celebrated in 2002.