The fifth symposium Interaction 2001 was held March 4 and 5 at Waseda University Tokyo. The symposium’s focus is the cooperation of the real organic world and “information technology”. Interaction 2001 saw 300 participants, 12 papers and the interactive announcement (which included 58 demonstrations) over the course of both days. The curtain opened with the introductory lecture by media artist Kazuhiko Hachiya. Throughout the symposium a lot of research about the future of information technology was shown. 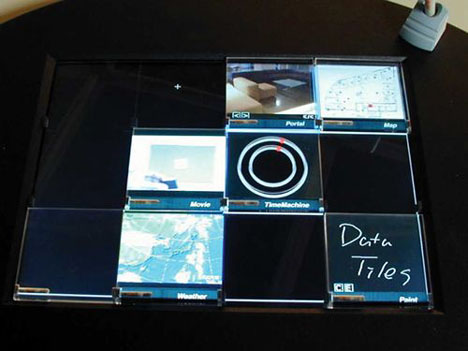 In addition to the usual oral presentations, interactive presentations involving the audience played a large role in the event. Symposium is sponsored by the Information Processing Soc. of Japan. 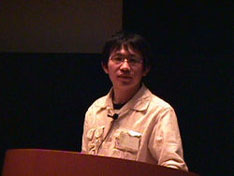 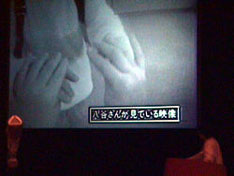 Following the opening by executive chairman Miwako Doi, “It is a historical moment in which twenty years have passed since the birth of the new GUI interface”, media artist Kazuhiko Hachiya continued with the introductory lecture. Entitled “small talk about the interface between art and technology”, Hachiya introduces his own works (such as “Inter-discommunication Machine” and “PostPet“) and began to introduce other Japanese media artists’ works (such as “Making interface my job”, “How to link human to human”, “Using withered technology for foolish things”, “Work in which computer technology doesn’t come out in front”, “The benefits of working with an engineer to raise quality” and the language of “detailed attention as a necessity to technological output”) all of which were impressive in content. 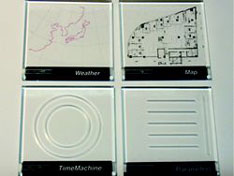 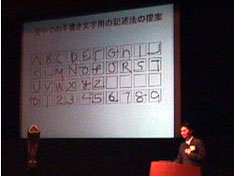 Then monographs with the theme of the “Real World” were presented during which there was a presentation of “Data Tiles” by Rekimoto, Oba in SonyCSL, another by Brygg Ullmer from MIT Media Lab, finishing with a presentation of the handwritten character system in the air by Sonoda et. al. of Waseda University. The system “Data Tiles” places a transparent tile on a tray (the level plane display) and controls computer and information. For example, when a tile of the weather chart on a blank map is printed and combined with a tile of the time base on and a circular groove is dug, a subsequent pen tracing the groove enables us to see a change in weather relative to the change in time. Those tiles have RFID tags made from a built-in radio device and because of this device, the tray can recognize where the tiles are and show the related images on the display. The software is constructed with JAVA so that it loads the related class files automatically by the user placing the tiles. Among the presentations in this symposium ‘Interaction 2001’, this ‘DataTiles’ was by far the best presentation for its technique and design. I really hope I could actually experience the piece with my own hands.