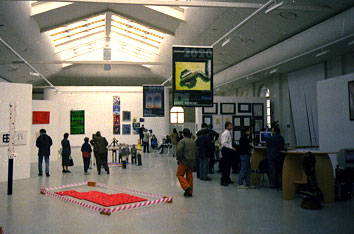 This year the annual “Focom” festival took place in the building of the first Moscow electric power-station, which appears now to be one of the most expensive galleries of our city – “Maliy Manezh”. The festival’s history is rather long, its status is being defined as annual and regular. In addition to the modern artists’ paintings in the gallery’s finely illuminated and spacious hall one could find metallic statues of party people, a floor-composition of buttons and a huge pipe that blew at the puny tinny weathercocks.

There were few visitors that were wandering between the walls of the hall, changing opinions. They were totally perplexed. The perplexity was due to the fact that this event was widely advertised to be a computer graphics and new visual culture festival. As distinct from the last years’ “Focoms” one could hardly find computer graphics and multimedia at this one. People that called themselves ‘new visual culture’ appeared to be using the art language of the late seventies. The only product worth seeing was the lately brought to us Apple cube and a monstrous printer Colorspan Displaymaker XII.

Not far from the place where “Focom” was going on an event of less importance took place. That was the “Angels Amoungst Us” exhibition, that presented the works of sculptor and artist Franc Williams.

This was the most exiting event that I lately visited. In the three tiny rooms of the gallery two dozen angels were situated, brought to life by the artist to become human beings. “Betrayed Angel”, “Binded Angel”, ‘Angel Praying”. That is a charming religious satire, recognizable images projection performed very skillfully.