From May 27th to 30th, forty digital talents from around the globe were hand picked to attend a design workshop like no other called Project 40 at Hyper Island school in Karlskrona, Sweden. The brainchild of three former Hyper Island students, Lisa Lindstrom, Henrik Karlsson and Maria Nohlstrom, Project 40 was the culmination of their thesis project. Lisa, Henrikk and Maria took it upon themselves to make Project 40 a reality, coordinating the speakers, the workshops and everything else, along with the help of Hyper Island students and staff. 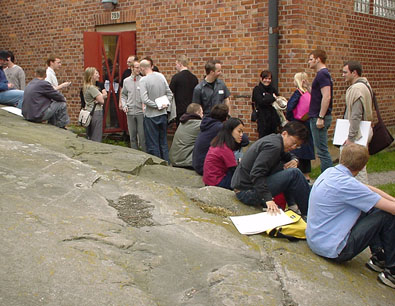 On day one, the 32 participants and 8 speakers had no idea what toexpect aside from the program guide sent prior to the conference. Thelevel of secrecy created around what the workshops would consist ofprovided a sense of urgency among everyone in attendance. Greg Henriques, the project40 coordinator, presented HIV and AIDs as thetopic of the workshop and presented Sanna Johnsson spoke of her work withdifferent organizations throughout the world. Several participantsand speakers initially protested the topic, feeling that the issue was toolarge and complex to really tackle in 4 days.

“We are all privileged designers, working privileged jobs, here atthis privileged school. What right do we have to develop a designsolution around HIV and AIDS with no research or real knowledge?” oneparticipant exclaimed. For some, the struggle to understand oneanother as creatives and to tackle a huge social issue between arigorous schedule of speakers and Swedish hospitality threatened toovershadow the “design” and “process” tenants that served as thetheme of Project 40.

The participants and speakers were divided into four Teams. Eachteam was assigned a meeting place and given a limited time tobrainstorm, explore, and present their ideas. Between team meetings,presenters lectured on interactivity, typography, motion and sound.Reed Kram from Kram Design presented his interactiveexperiments fromthe MIT Media Lab along with MIT student projects and his current interactive work for Prada 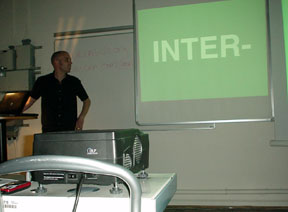 Mike Abbink from Method in San Francisco centered his presentationaround typography and how it can influence design and creativity.His explanations of fundamental type conventions such as hierarchy,space, dynamics and structure delivered new insights into howtraditional type principles within information design result insmarter and clearer solutions. For some, these type explorations werea review, but for others, it came as an unexpected inspiration to seehow traditional typographic principles apply to the online medium.

The end of day one consisted of team brainstorming sessions aroundthe project topic. There have been volumes written about HIV and AIDSin the last 15 years, and with no research time or resourcesprovided, the design teams had to learn what they “did know” asopposed to learning all of the unanswered questions. Many teamsstruggled with what exactly to do, how to address such a large issuein such a small timeframe. Many felt a concern to not just createanother western culture “bleeding heart” campaign, while others triedto address issues on the local level,specifically in Africa, whereHIV and AIDs are most widespread. Everyone agreed, however, that ifthey could come out of the project and effect just one person in someway, be it awareness or donations, that it would be worth the effort.

Team discussions were often cut short as a result of a rigorous schedule assigned by the Project 40 team. Much time and expense wasput toward food service and making sure that all of attendees had everything they needed. Over the course of the four days, many participants voiced a frustration at not having enough time to discuss and think through ideas. A visit by ship to a functioning Swedish military base, while interesting, underscored the difficulty of understanding where time and energy would be best spent with such an important topic to address.