Spring is almost here, the snow is slowly melting away from the streets of Montreal. Winter is hard on people in this part of the world. The lack of solar energy really gets to you by February/March which can lead to different types of physical and psychological disorders.

Still, that didn’t seem to stop human activity around here. Students from my university voted to strike to protest against recent budget cuts in the educational system. The strike lasted two weeks and different rally/protests were organized. But students in the Design department, who didn’t care to go vote in the first place, decided to turn the strike into something positive. Parallele was put together quite rapidly and the whole school was mobilized. Check out some of the different actions that were taken on Parallele’s official web site. Beware, those Quicktime movies take quite a long time to download.

Also at the UQAM, students took part in an audiovisual workshop called Derapage. Small video-clips ranging from 30 seconds to 2 minutes were produced and a special party was held to present the different productions. Prizes were attributed to the best ones and the night ended with some neat audio performances. Derapage was a success and organizers are already thinking about future editions of the event. 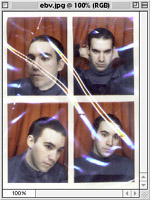 During Parallele (mentioned above), I met Etienne Bourque-Viens,a graphic design student. Etienne just came back from Italy where he spent the last six months at Fabrica. I met with Etienne on a cloudy morning for a short interview.

Please introduce yourself and tell us a little bit about you.

My name is Etienne Bourque-Viens, I am a student in graphic design, here in Montreal. I’m currently working freelance for different web projects which I’m really enjoying. Learning is very important to me, I’m always looking for something new. Oh, and I really like to travel, in fact, I just came back from Italy a few months ago.

Tell us how you hooked-up with Fabrica.

It all started a year ago. I was looking on the internet for some kind of internship program in Italy, a place I absolutely had to visit, when I discovered Fabrica. I sent them my portfolio and after a couple of days I was invited by their New Media department. I ended up staying for six months. 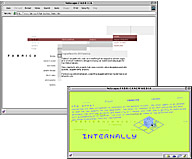 What have you done during your stay?

Fabrica tries to keep you busy as much as possible. One of the first thing I worked on was Fabrica’s website as well as some of the web editions of Colors Magazine. I also created a font called Newmed for the New Media department. But these are only a few of the things I did during my stay. 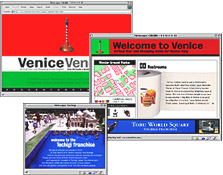 Compared to the first version of Fabrica’s website, the new version is quite different. Tell us about your approach for that project.

The first version of the website was using Shockwave technology and people kept complaining about how they had trouble with the plugin and so on. We decided the new version would be 100% compatible with every browser and to make it load faster, no images was to be used. What you can see on the website was designed using only HTML, which was a really long and painful process. I think that good design is always good design no matter what technology it uses, sometimes people forget that.

Looking back at your experience, what have you learned at Fabrica?

Working with people from other countries opened up my mind to so many new things. It changed my perception about design and even about life I would say. I developed my passion for new media, working on interactive communication process.

What are you working on right now?

I recently was pretty busy with school but right now, my main focus is my on-line portfolio which is called Organize. The different user interfaces that I created for it experiment with a variety of ways to present the same content.

What are your plans for the months to come?

I’m looking forward to another international new media experience. I am thinking about San Francisco but nothing is certain at this time. For sure, I want to continue traveling. I intend to come back in September to concentrate on my freelancing career. Even though it’s a very young industry, a lot of big players are investing in Montreal because of its large potential, so it’s very challenging around here.

To end this off, complete this sentence: Montreal is nice because…

Because of the nightlife, the languages, the seasons, it’s peaceful and because IT’S NEW!