Eric So is having his breakfast in a dai pai dong whilst the other patrons in the restaurant are having their afternoon tea. It is 3:30pm in the afternoon, the first warmer days of the approaching spring is near. I sit with him, drinking my iced lemon tea, looking on, as his calm and collected manner reflects much of his persona. Between petite mouthfuls of Chinese noodles, he explains his career as a concept visualiser/art director, in the advertising agency, how it was all a daily predictable grind. With the advent of computers and the cut in illustration fees, Eric decided to get out of the fast paced life of ad culture to something more daring and less predictable. His heart focussed in developing his own style, his own brand and a way of doing something which he loved and is a signature of his true talent. 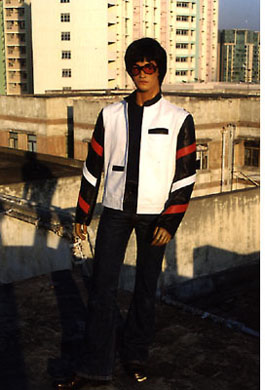 Eric So’s most recognised work are his handmade 12″ figures of Bruce Lee. His extensive toy collection ranges from old Superman figures to Japanese superheroes. His sudden realisation that Hong Kong had no super hero. So Bruce Lee was his obvious choice. It was much better than Superman because Lee was a real legend and from Hong Kong. Thus it inspired Eric to create 12″ and life sized figures of his favorite childhood icon. Although he first started out in comics and selling his first work in comic expos, he later developed his talent in oil paintings. His work was shown together with his figures last year in New York and Tokyo.

With a huge response from both sides of the globe for his action figures, Eric So set out to invent new concepts of his “So Fun” couple concept with fashion label SSUR in NY. This is only one side to Eric So’s coin so to speak. The “Art of…” figures of Bruce Lee and Chow Yun Fat are his more realistic molding of icons of his childhood in the late 70’s and 80’s. Eric admires Lee and Fat not for what they are popularised for in the media, but of what they are as an artist. Bruce Lee is known for his kung fu skills, yet he is a deep spiritual man. Eric believes that Bruce Lee’s early death was the time where he developed only his kung fu and movie skills yet had potential for other things, like art sense. If Bruce Lee were alive today, he would have been a cool philosopher and would be known as one by everyone. That’s what Eric admires in Lee. With Chow Yun Fat, it was the 80’s when his career was huge in Hong Kong. His gangster and triad symbolism earned Fat’s admiration in many teenage kids, and one of them was Eric. “Chow Yun Fat represented the 80’s for Hong Kong and deeply represented or the period which I grew up in, not because of his popularity in Hollywood”.

The “So Fun” concept however, is somewhat more personal, more cartoon orientated, yet a message that stems personally from himself. A project he can delve into or with another artist, combining his message with some other, whether in Hong Kong or from around the world Eric explains. 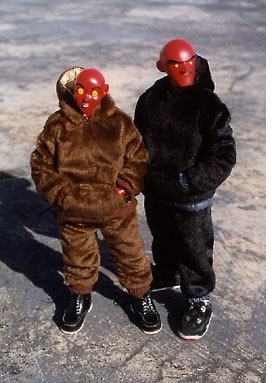 ‘ “So Fun” is a concept of a couple. This couple is actually a model, using different variables to be fabricated onto this generic framework. It’s concept is simply-No Boundaries. No Regions. No Religion. No Race. No Social Group. No Discrimination. No Class Level. No Fixed Image. No Designated Brand. No Politics. No Time Frame. A conclusion would be “The World As One” “A Desire for Only The Very Best” “Surpassing Oneself” As he is saying this, I can’t help and think of his philosophical interpretations similar to Bruce Lees’. “So if I play with some other artist with a different brand, identity and concept, the couple can be used as the skeleton to hold the idea together. The limit is no limit. Like how I worked with Russell’s SSUR label that represented NY, I represent Hong Kong side of it. It collaborates both aspects of the concept together, working nicely and equally for each other. With the work I will be putting into the Love Project in Atom Magazine 02, you can see that my interpretation of LOVE in these generic figures has changed in colour and styling. The story of this couple explains Love as something beyond superficial outlook. The man is a very traditional Hong Kong worker, and the woman you can see is very trendy professional, sophisticated in ways the man is not. He wears simple clothes, she goes out and buys Gucci or Prada yet they have a bonding. They have a love for each other. Even though their identities differ. They are not separate, but bond as a couple. This is the concept for “So Fun”. There are endless uses for these figures. If I were to give them names, the Love couple would simply be, “So” for the male and the female “Fun”.’

Eric looks into the future with a different outlook. He started out with comics which he admitted was ‘ a bit confusing to me” But with his hardworking spirit and a vision to improve in his style, he is still working on many different mediums of painting, sculpting and he has succeeded very well. He hopes people will see him not just on his figure creations, even though it is trendy to most Asian kids. “The drive or message in all my work are my interpretations of Hong Kong culture”.

I asked Eric the ultimate question: If he were allowed to bring 5 things to a desert island with no hope of escape, what would it be?

“Family, My love, and Hope. That’s all there needs to be.”

Check his new site designed by DHKY:
http://www.ericsoart.com
and his exclusive “So Fun” work in LOVE project-part 2 (out in April):
http://www.atomicattack.com/love/